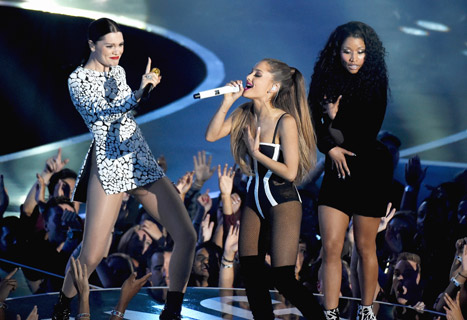 Guess, you were just waiting for this as most award events now are characterized with wardrobe malfunctions and this time, it was none other than the “Anaconda” singer, Nicki Minaj as she suffered a broken zip during her highly-anticipated opening performance of “Bang Bang” with Jessie J and Ariana Grande.

Minaj stole the show with a sexy performance of her new butt-celebrating single “Anaconda,” twerking with a group of scantily clad female dancers while rocking a green sequined two-piece number.

She attempted a quick outfit change to a black dress for a performance of “Bang Bang” with Grande and Jessie J, but didn’t quite make it in time, as she spent the trio’s time on stage holding her tight black minidress together while she attempted to multitask and rap. “We ran out of time getting the dressed zipped up,” she told The Hollywood Reporter.

Nicki however has also taken to Twitter to explain the situation and stated she is ok so far as it wasn’t a nipple slip.