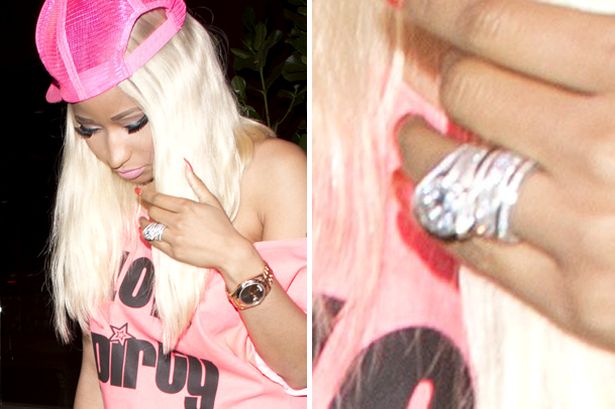 It might be a massive coincdence, it could be a love at twerk sight – or more likely just a massive publicity stunt…

It might just be one massive diamond ring shaped publicity stunt but just two days after DJ Khaled’s bizarre proposal – Nicki Minaj is wearing a huge rock on her engagement finger.

The curvy singer hasn’t responded to the request for marriage which was awkwardly aired on MTV but these pictures might tell a different story.

The ring appears to be the exact same $500,000 diamond rock which DJ Khaled unveiled in his heartfelt proposal.

Nicki wore yellow jeans and a neon pink hat with her name blazened across the front as she was pictured leaving Crustation Restaurant in Beverly Hills.

The pair aren’t even dating, though Minaj currently IS single and is probably dwelling on a decision.

US superstar Khaled was talking with MTV when he pulled out the giant diamond ring and proposed to Minaj.

There’s no word yet whether or not he asked his mate Drake for permission to wed his ex-lover.

It’s most likely a huge publicity stunt as DJ Khaled’s album is released in a few months… but maybe he fancies marrying the booty-shaking, twerking female rapper. Who knows?