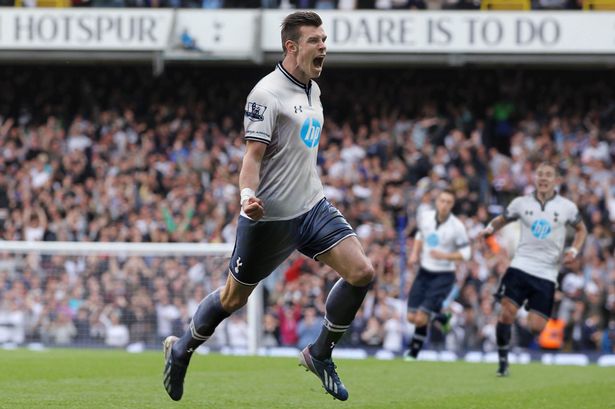 That is what Real Madrid have been told they will have to pay if they want to sign the Welsh wizard.

Tottenham chief Daniel Levy is ­determined to play hardball and is insisting Real must smash the world transfer record to bag the player.

The Spanish aristocrats value Bale at around £85m and have made it clear they expect him to submit a transfer request to force a move.

A six-year contract worth £150k-a-week is on the table for Bale, currently injured although he is in Hong Kong on the north Londoners’ pre-season tour.

The Wales international has told Real he wants to sign for them but has yet to demand a transfer.

New Bernabeu coach Carlo Ancelotti is planning for next season with Bale in his team and has already allocated him the No.11 shirt.

A senior source at Real said: “Bale is the only high-profile player we are pursuing.

“Ancelotti will play him on the left and Cristiano Ronaldo on the right in a 4-3-3 formation.

“There is no doubt in anyone’s mind that Bale will be a Real player this ­summer.

“If that means he has to put in a transfer request to force the issue then that is what we expect he will do.”

Their ruthless pursuit of Bale is fuelled by Barcelona’s signing of Brazil superstar Neymar for £48.6m.

Now the pressure is on Bale to force through a switch to the Bernabeu.

Real have offered 100m euros, or £86m – which busts the game’s record fee for Ronaldo – but it comes with the caveat that the bid will stand only for this summer.

But if they refuse to budge then the Spaniards, led by ­president Florentino Perez, will ask Bale to ­provide a formal written transfer request.

The player is adamant that his desire to move to Real Madrid is not about money or playing in the Champions League, but simply it is about taking the chance to fulfil a childhood dream.

Bale did not play in Tottenham’s 6-0 victory over South China FC in Hong Kong on Saturday in the Barclays Asia Trophy.

The official reason for his ­absence was his failure to recover from a buttock injury, but Sunday People Sport understands that, with or without the problem, the star would not have been in the right frame of mind to play.

He is said to be distraught that the club are standing in the way of the ­biggest opportunity of his career.

LA Galaxy in Phoenix on Thursday.

Bernabeu legend Zinedine Zidane – now part of the club’s management team – said: “We have not given up on Gareth Bale – it is impossible to give up a player of that quality.

“Of course Tottenham are doing the right thing by trying to get him to sign a new contract.

“We have made it clear he is a target, but Real Madrid have a very good ­relationship with Tottenham so we would make sure any approach is done in the correct way.

“It is ideal to get any new players in as early as possible so they can integrate with the team – but it is not always ­ possible and the best players are worth waiting for.”