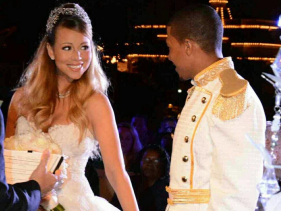 While American Idol continues to play out the Mariah Carey and Nicki Minaj feud, Mariah’s husband Nick Cannon is not having it.

The America’s Got Talent host took to The Talk yesterday and said that the whole situation is “kind of unfortunate.”

When you see someone like my wife, who tries to remain classy and tries to take the high road, it feels like everybody else around it — including the network and the producers — feed into this whole sound bite drama. It feels like it lacks substance.

You can’t even blame Nicki Minaj or her team. I feel like they fed into that. They wanted to see the drama… I think America in general is tired of seeing the mean judges and people be mean to people. They’re over it … In the book of Mariah Carey, ‘American Idol’ will be a footnote.

As for his wife’s potential return to the show, he stated:

I wish that experience could be what the show is really supposed to be about. Because she really loves these contestants [and] has a connection with her fellow singers… It’s a time when she has so many amazing things going on in her life, if there’s something unstable — I think if they get it stable she might re-look at it, but no one wants to be a part of something unstable.

She tried to tell the network, ‘I don’t think this is going to work. I’m afraid. I don’t need this. I’m doing this for the brand of American Idol… and I love this show, but you’re kind of taking it in the wrong direction because this is going to turn into one of those reality shows. I didn’t sign up to be on ‘Love and Hip-Hop.

Idol producers better have something up their sleeve for next season because Mariah had it right. None of this is working!