My boobs have caused me more joy than pain – Actress 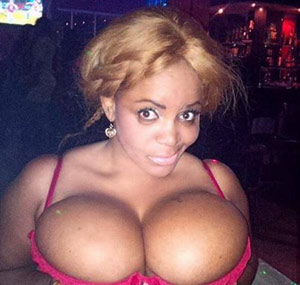 Nobody has been able to figure out Cossy, at least, not completely. She is a lady we have known for too long and too well. She started out as a video model, then walked the ropes in Nollywood and now seems to be doing more of music, which seems to suit her just fine. Cossy has said music is actually her first love and the release of her first album ‘Nutty Queen’ was a good way to prove it.

Seeing the video, of course, would get you saying “It’s Cossy alright”, there is so much of the bulbous boobs doing their thing as usual, not to talk of the strip tease, that came with so much flashing of laps, and with what appeared to be a trick with the gluteus maximus area, gaping out of their confines, but all scored a point- erotica.

It doesn’t look like Cossy is going to spare us of those daring mammary, not for a long while. She told Sunday Vanguard that much in an interview that she would never cover them until she is old. And only a couple of days ago she told me all memories she has had of her boobs have been pleasurable even though she conceded not everyone takes kindly to them. “My boobs have never caused me any embarrassment, rather only good things. Though you can never be loved by all. Some love you and some hate you. But my boobs have caused me more joy than pain”, she said.