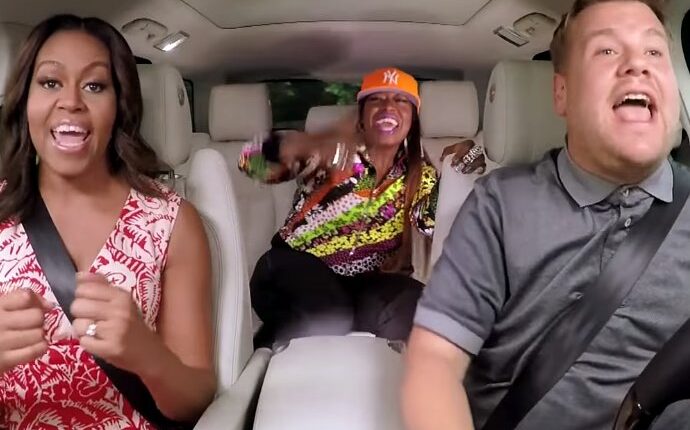 So I’m here wondering if this could ever happen in Ghana. Like, imagine the social media uproar and the abuse the first lady would have to contend with.

Played during his Wednesday, July 20 episode of “The Late Late Show with James Corden“, the segment opened with Corden about to take White House tour which then took “an unthinkable turn” when the First Lady joined him for a spin.

The duo first sang to Stevie Wonder‘s “Signed, Sealed, Delivered”. “I love Stevie Wonder,” Mrs. Obama said of her favorite artist. “I think I know every Stevie song on the planet.” Asked when the last time she rocked out in a car, she said she did a rock-out several months ago with her daughter who learnt to drive.

The two also talked about President Obama and the First Lady’s Secret Service code names. Hers is “Renaissance” and her husband’s is “Renegade.”

Elliott has opened up about singing with Mrs. Obama. “When we got in the car and I saw her rapping ‘Get Ur Freak On,’ it kind of bugged me out!” she told PEOPLE. “I know for a fact that it was all over my face like, ‘Wait, is she rapping this?’ But that goes to show you just how cool she is. People hold her in such a high regard – as you should – but she’s so down to Earth. I was just sitting in the back like, ‘I gotta be dreaming. This ain’t even real. Is somebody going to wake me up and say, ‘You overslept.’ ‘ ”

Just watch the video below.