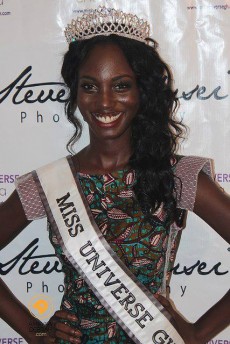 According to information picked from NewsOne, Miss Universe Ghana 2013, Hanniel Jamin was on Tuesday abducted at Adabraka, a suburb of Accra by some unknown assailants for some several hours and was later freed, but not with her belongings.She was robbed of her handbag, pair of shoes, phone and her monthly allowance of GHS 250 that she received from organizers of Miss Universe Ghana, the same day she was kidnapped.

The 19-year-old, Senior High School graduate who beat nine other beautiful contestants to win the 2013 edition of the Miss Universe Ghana pageant in Accra, has since been traumatized by the incident.

A family source said the queen was picked up on Tuesday morning by the organizers of the pageant to the Russian Embassy in Accra.

“Subsequently, the organizers took her to the passport office in Accra, and later dropped her off somewhere at Adabraka to find her way home.

While on her way home, she picked a taxi and the driver kidnapped her to Amasaman.”

The case has since been reported to the Osu branch of the Ghana Police Service according to source.