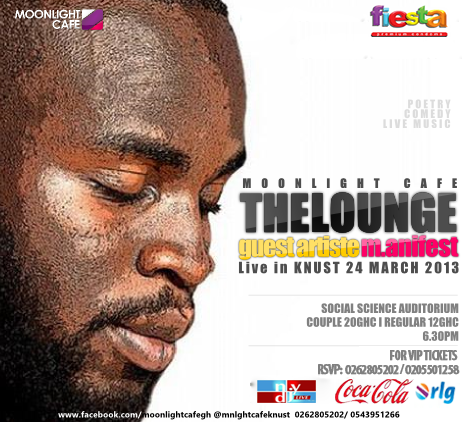 KNUST is finally set as grounds to host another heart throbbing series of educative performances in the event calendar of Moonlight Cafe events as it enters its fifth season.

The Moonlight Cafe events which thrive basically on various University campuses especially KNUST and the University of Ghana is with the utmost aim of entertaining and educating the university public through poetry, comedy and live music performances from renowned musical acts.

After series of wonderful performances from Ghanaian songstress Efya, Hip hop musician and producer Jay So, C Real and comedian DKB last year, another giant in the music industry, M.anifest is billed to thrill patrons on KNUST campus on March 24th 2013.

Proving the eminence of this event in a tweet by renowned and well respected UberFacts handle on social networking site, it stated;

The Lounge II is officially sponsored by Fiesta Condoms, Coca Cola, and RLG with support from NY DJ Live.

Rates pegged affordably at 12 cedis for singles and 20 cedis for couples, VIPs can also get their tickets by calling 020 550 125 8. The event comes off at the Central Classroom Block (CCB) of Social Sciences faculty.

Notorious B.I.G.’s ‘Ghost’ To Star With His Kids In New Cartoon