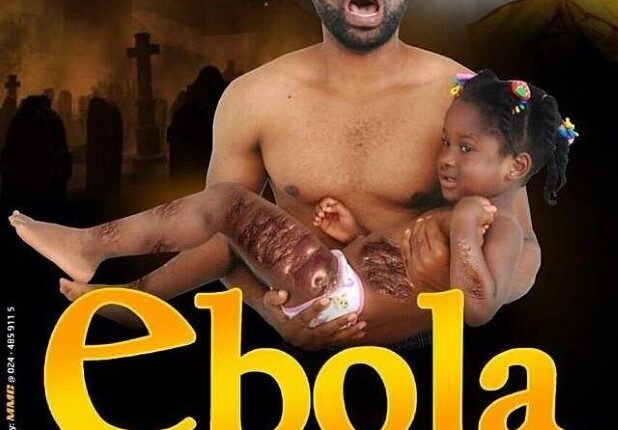 As one of the very few people who have all this while been on the neck of Kumasi based movie producer and CEO of 2 Eyes Production for being an opportunist and jumping at popular issues that unfold to shoot movies, I think it is only right to applaud him for getting it right this time with his latest production “Ebola” although he still jumps at a popular occurrence and this time, the deadly disease plaguing Africa.

I thought it was one of those regular jokes when I first saw the movie poster on Facebook and even drew my own conclusion after realizing it was from Samuel Ofori’s production house.

I knew “ibi den tins som”, one of those things as I saw publications that the movie had been approved by some quarters. In order to be sure and not to fall for one of the pranks bloggers play on the mind of their readers just to sell a product, a quick check at the cinematography board proved the movie had been approved and passed for public viewing as it was very educative although a few suggestions had been recommended which the producer had quickly done (You know Kumawood and how they can shoot in a day, lol).

Exclusive information gathered even indicates that the Ministry of Health has been roped in to make it the movie an educational material.

On a bigger score, the powers that be have asked the production house to create good subtitles for the movie to be distributed by the Liberian government throughout the country.

Thumbs up Sammy, I guess you got it right this time. I hope the criticism worked.

With my very little knowledge on Ebola, I still find it shocking that the movie poster has a child infected with the deadly disease on the bare hands of the Samuel Ofori. I must say I have not watched the movie yet but I wish something could be done about it, unless of course, the picture seeks to tell that, Samuel Ofori was also ready to die holding the child with his bare hands.

Surprised? Eazzy confirms she’s back together with Keitta