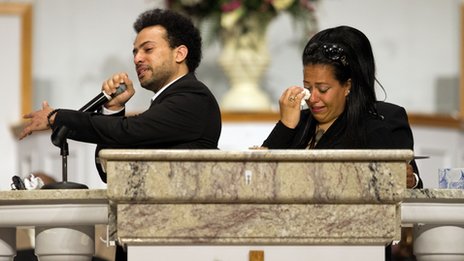 Chris Kelly of 1990s rap duo Kris Kross, who died last week at the age of 34, has been laid to rest in his home town of Atlanta, Georgia.

The rapper was known as Mac Daddy while in Kris Kross, who shot to fame in 1992 with their hit single Jump.

Producer Jermaine Dupri and rapper Da Brat wore their trousers backwards in homage to the duo, who were known for wearing their clothes back to front.

“It’s been a struggle for me every day, but there was a peace that came over me this morning because I know he’s in heaven,” Smith said.

Smith was supported in the church by Dupri, who discovered the 1990s teenage duo in an Atlanta shopping centre.

Kris Kross topped the US charts in May 1992 and reached number two in the UK with their single Jump. The song stayed at number one in the US for eight weeks, selling four million copies.

Smith and Kelly were reunited in February to perform at a show celebrating the 20th anniversary of their record label So So Def.

Kelly’s official cause of death will not be known until a toxicology report has been completed.