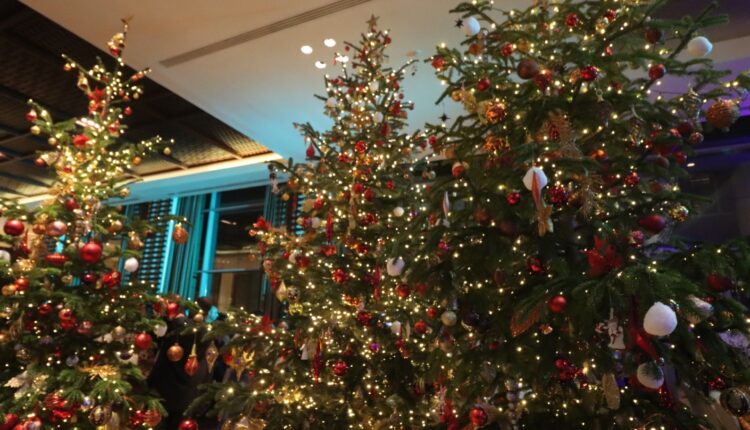 The Kempinski Hotel Gold Coast City Accra on Sunday held its Christmas Tree Lighting event attracting music groups and soloists who rendered spectacular performances to expectant dignitaries and the general public. This event marked the first day of the Advent calendar, which the hotel has turned into a tradition celebrated every first Sunday in December.

The three-hour celebration brought together Ghana’s Ministers of Tourism; Gender; Members of Parliament, Officials of the Diplomatic Community, Traditional Rulers with their royal entourage, business heads, commercial leaders and celebrities.

Guests were welcomed to the heavenly sounds of the Seprewa (a Ghanaian musical instrument) played by Safowaa Afua Gyamfi, accompanied by the Ruotolo String Quartet. There were joyful Christmas carols, and festive solo and choir performances from the Accra Youth Sinfonietta Orchestra, Kinder Paradise Choir, and students from Lincoln Community School and Roman Ridge School. British classical pianist and composer Panos Karan delivered a stellar show as he performed ‘Keys of Change’.

The general manager of Kempinski Hotel Gold Coast City Accra, Mr Manish Nambiar, said in his welcome address, ‘Today is a very special day for us as we celebrate our fourth Tree Lighting Ceremony. The lighting of our evergreen Christmas tree is a symbolic way to begin the festive season. These trees stand as a beacon of light, as we celebrate with family and friends and spread goodwill to our community.’

Mr. Nambiar took this opportunity to officially announce the opening of Resense Spa at Kempinski Hotel Gold Coast City Accra. He stated that this is the biggest luxury spa in West Africa, encompassing 3,000 sq m of wellness and fitness facilities. ‘We have an authentic hammam; separate male and female wellness areas with saunas, steam room and whirlpool baths; ten treatment rooms, including two couple suites; fitness facilities; and a cosy private relaxation lounge. We invite you to come and enjoy the unique experiences crafted to ensure wellness of mind and body.’

He also mentioned some of the community activities the hotel has been engaged in throughout the year. Kempinski Hotel Gold Coast City Accra launched Concertini, to provide a stage for young artists in the city to showcase their skills and talent. The hotel has also offered an internship to a student of Woodfield Manor Special Needs School, to give him the opportunity to learn work skills and gain some experience in hospitality. In Q3 of 2019, the hotel supported the African Bicycle Contribution Foundation in launching the drive to donate free bicycles to students in Ningo High School, and also hosted the George François Fundraising Concert to support New Horizon Special School. On 26 November 2019, Kempinski Hotel Gold Coast City Accra partnered with the Mama Rina Foundation to host ‘Coat of Many Colours’ – a fashion show to raise funds in support of beneficiaries of the foundation.