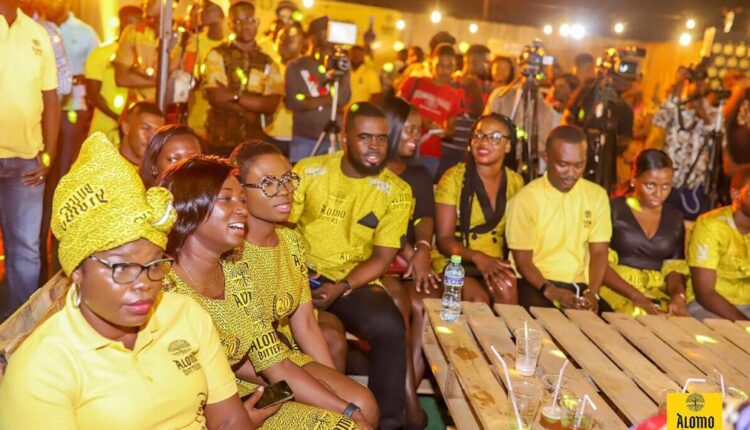 As part of the celebrations, Kasapreko is introducing a fantastic promotion to reward customers with over 2million worth of prizes with a grand prize of two cars to be driven away by two lucky customers. Also, there will be free televisions, smart phones and live goat.

Anytime you buy Alomo Bitters’ 50ml sachet please open it and what you see is what you get. The promo is on the glass as well.

“This milestone is a reflection of the support and commitment we have received from the people of Ghana, the Food and Drugs Authority, the media, our staff and all supporting agencies for the affirmation of their trust in promoting local businesses,” he said.

Kasapreko is a 100percent owned Ghanaian company. The business was birthed out of a goal to provide quality drinks at affordable prices to Ghanaians; a vision that has now expanded to a global focus.

Kasapreko Company Limited now has a project in the Ashanti region, which is set to increase its capacity to meet the growing needs of customers. “This is nothing short of our dedication to serving our country.”

Alomo Bitters’ success is traced deep down to the roots of its authentic herbal composition and organic appeal. Alomo bitters is extracted from local plants using sophisticated machines to blend and package to the taste of Kasapreko’s cherished consumers.

“I urge all our consumers to continue being part of our success story and we will grow together. I would want to add my voice to the call on promoting locally manufactured products as these have proven to be of high standards and quality,” Mr. Adjei added.

For two decades, Alomo Bitters has been and will continue to be at the forefront of innovation and pacesetting in the beverage industry. Until the arrival of Alomo Bitters in the Ghanaian beverage industry, bitters were hardly known as products to be openly advertised and consumed by the middle to upper class in society.

For two decades now, Alomo Bitter, produced by Kasapreko Company Limited (KCL), has not only opened the market for the ‘bitters industry’ but has cemented bitters as another type of beverage, comparable to beer, wine or whiskey on the international stage.

Through Kasapreko’s partnership with the Centre for Scientific Research into Plant Medicine (CSRPM), Alomo Bitters is the first scientifically authenticated bitters on the Ghanaian and international market. Every property used in the production of Alomo Bitters meets international standards, according to the Centre.

The product has, since, been at the top of the list when it comes to herbal alcoholic beverages in Ghana and now in several African countries, even spreading beyond the continent.

Alomo Bitters which is packaged in 200ml PET and 750ml glass bottle has won several local and international awards. In 2015, it was adjudged the Official Tourism Drink of Ghana. In 2012 Alomo Bitters became a Super Brand. In the last quarter of 2013, CNN Money identified Alomo Bitters to be among the top five emerging brands in the world.

In 2015, Kasapreko unveiled a sleek new look with the same authentic taste for Alomo Bitters. It came with an already existing hologram security seal, a step seen by many as a major innovation drive for the product, and sets it apart from competition. The product now exists in four variants – Alomo Bitters, Alomo Silver, Alomo Gold and Alomo Black.

Powerful health benefits of Alomo Bitter for your body

What are its Health Benefits?

This is the first health benefit of Alomo Bitter. The idea of Alomo Bitter for cleansing the body as well as improving vitality came from Prof. Catherine Falade, a professor in the Faculty of Pharmacology and Therapeutics, University of Ibadan College of Medicine. Alomo Bitters cleanses the body in terms of digestion, while improve vitality as a health supplement.

Dr. Falade is aware that there are digestive bitters and cocktail bitters that can be used to treat or prevent digestive issues, however the real potentials of Alomo Bitters exceeds well beyond that. She stated that bitter flavour is considered an important element to everyday African meals, and some ingredients such as barks, flowers, diverse roots, and herbs contribute to this flavour. Alomo Bitters encourages the digestive system by stimulating saliva production, bile as well as gastric juices to balance both healthy digestion with appetite.

Next, Alomo Bitters is believed to be antimalarial. Antimalarials are medicines that are formulated to prevent and treat malaria. Antimalarials work by killing the plasmodium parasite spread by mosquito bites into the bloodstream, which further prevents the development of malaria into further critical stages. Malaria, although can be cured medically, requires medical diagnosis that involves laboratory examinations and imaging.

In line with balancing appetite plus also sugar levels, Alomo Bitters is also supported by its reserves of vitamins A, D, E and K to make that possible. Vitamin A benefits, or retinol plays an important role in maintaining eyesight. Vitamin D or calciferol is responsible for bone and dental health. Vitamin E prevents respiratory and dermatological diseases whereas vitamin K benefits is needed by the body to help blood clots.

5 Ghanaian Musicians Stuck In Foreign Lands But Desperately Want To…