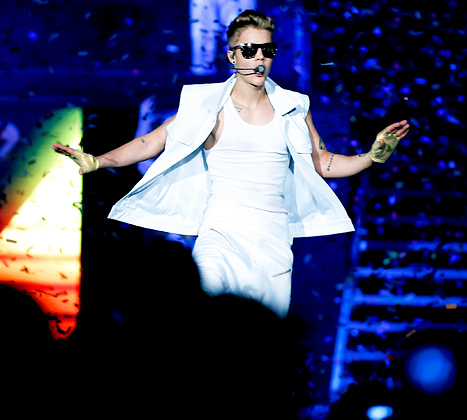 Justin Bieber was attacked by an overzealous fan at his show in Dubai on Sunday, May 5, but luckily for the singer, security guards were on-hand and quickly tackled the fan before he could disrupt the show too much.

“A man ran on stage during ‘Believe’ and tried to grab Justin and knocked the piano over,” a source close to the 19-year-old pop star tells Us Weekly of the incident. “He was a fan. Security detained the young man. All was fine and Justin continued the show.”

In footage shot by a fellow fan in the audience, Bieber was at the piano when the fan rushed onto the stage to grab him, and in his attempt to flee from the security guards, the stage stormer knocked the piano off its hinges so that it was upended in the middle of the stage.

Bieber and his band managed to finish off the song without further incident.

The young pop star has been making headlines throughout the European leg of his “Believe” tour, most recently after reuniting with ex Selena Gomez backstage during his April show in Norway.