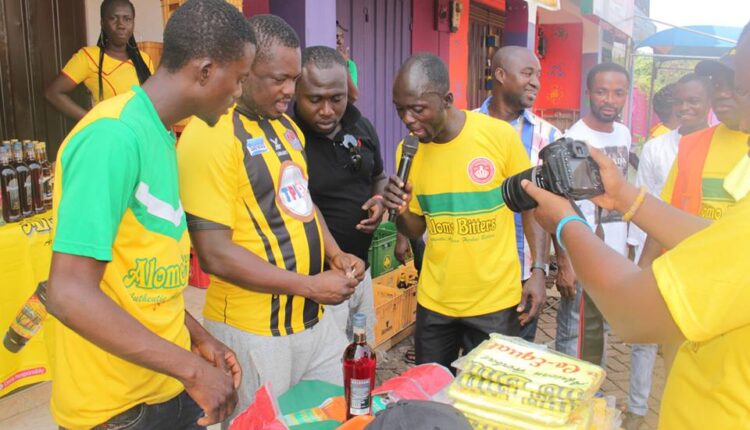 The ‘Alomo Sankwan’ is a weekend soup- eating campaign being organised by Strategic Communications and supported by Kasapreko Company Limited, producers of  Kasapreko Alomo Bitters to entertain and interact with consumers.

The campaign was derived from the local Akan dialect ‘Sankwan’ which means taking in or eating soup and it has already built a lot of reputation in major parts of the country.

What usually happens is the ‘Sankwan’ team makes a stop at particular local eateries, ‘chop bars’ and restaurants in cities where customers are treated to entertaining experiences.  Already the event had been in towns like Koforidua, Takoradi, Kumasi and others.

This Sunday edition will come off in Accra at the Achimota Jerusalem Pub as a concert from 10am till everyone is tired.

It’s being described as the official Valentines’ Day after-party   and will be attracting large numbers of music fans and Sunday revellers around Achimota and beyond.

There will be exciting live performances by artistes; Kwesi Pee, Wutah Kobby, Jupiter and Double among others.

The rest will include Nero X and Kwame Zaggy with comedy performances from DKB and The two Idiots among others.

Nigerian Actor Confesses: “I Knew I Was HIV Positive & Infected My Wife”