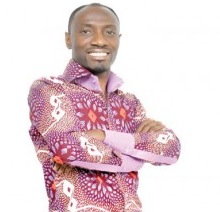 Enigmatic gospel musician and minister of God, Pastor JOSH LARYEA is now to be  known as TSEATAA, a local Ga name that refers to God as FATHER.

TSEATAA is a covenant name given him and his siblings by their dad as part of their surname.

According to the ace gospel musician, his dad took this bold initiative in a bid to dissociate and delineate himself from an idolatrous background to form a new unit of a godly family and reaffirm his covenant relationship with God on behalf of his children and descendants there from. Hence, in his own words, “We are TSEATAA’S CHILDREN.”

Explaining the rationale behind the timing of the name switch, Tseataa states,” throughout the years I have become more conscious of God’s special grace on my life and this continually reaffirms the fact that my father indeed dedicated us to Him. Most times I am tempted to say He loves me more than everybody else.”

With seven successful albums to his credit, he is set to release his 8th, aptly titled “Kane”; and believes that since the number 8 is synonymous with new beginnings on another level, the time is right to openly let the whole world know what has been his “secret”; in his own words, ” that I am HIS, and He is MINE.”

TSEATAA’s unconventional style of contemporary gospel is hugely popular with the youth and older generation alike and many will be pleased to know that he is bringing back his lively combo of heavy “gome” rhythms and versatile vocal expression on his new album.

The new album, “KANE” which means LIGHT, is set to be released in the coming weeks.

TSEATAA is currently the Lead Pastor of Doxa Temple of the International Central Gospel Church and the Assistant Director at the Chaplaincy of the Central University College and a lecturer at Daniel Institute, an affiliate of CUC and ICGC.

He is also the founder of Blazing Altar Worldwide; a non-denominational prayer gathering that sits 700 and more once every month. He is married to Vivian with whom he has four children, Kirk, Josh, Kelly and Kiki.