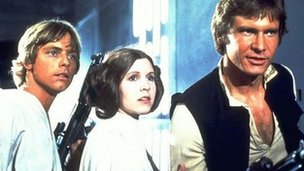 Star Wars creator George Lucas said he was the “ideal choice” to direct the movie – due out in 2015 – adding “the legacy couldn’t be in better hands”.

It will be scripted by Oscar-winning writer Michael Arndt.

Abrams, who co-created Lost and directed the Star Trek reboot, said he was “more grateful to George Lucas now than I was as a kid”.

In October, Disney announced it had bought Lucasfilm for $4.05bn (£2.5bn) and was committed to three new films.

Former Lucasfilm president Kathleen Kennedy, who will produce the films, said Abrams was “the perfect director to helm this”.