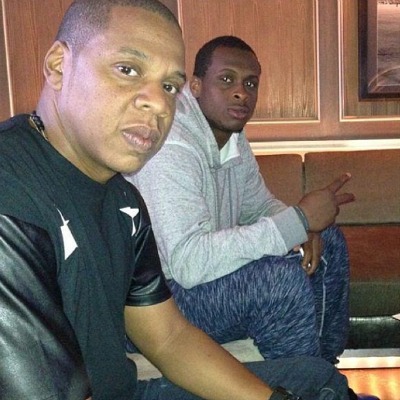 Jay-Z’s Roc Nation Agency is picking up clients every time you turn around. But he recently gained a client in the NFL and that is raising many eyebrows.

Geno Smith, a rookie quarterback picked up by the New York Jets during the NFL draft, recently signed to the Roc Nation Agency. The signing immediately raised eyebrows and there are reports suggesting that this was not on the “up and up.”

According to Yahoo! Sports, Smith almost immediately fired his former agents, Jeff Nalley and Erik Burkhardt of Select Sports Group, after he fell out of the first round of the draft and was selected 39th overall.  Players do sometimes part ways with agents when things like this happen, thinking that they aren’t doing their jobs. However, its what happened next that has Jay- at the center of yet another investigation.

Smith then signed with Kimberly Miale, a lawyer who only has two “B list” sports clients. This is a little odd because although Smith may have dropped out of the first round, he is still considered a major force to be reckoned with during the 2013-2014 NFL season; in fact, he’s fighting for the starting quarterback position against Mark Sanchez.  So one would think that he might want a stronger agent, right?

Representatives of the National Football League Players’ Association (NFLPA) have decided to investigate to see if Jay-Z was directly involved in negotiations with Smith. In 2012, the NFLPA banned the use of “runners,” which are people without appropriate credentials used by agencies to recruit potential clients.  Jay-Z doesn’t have any of those credentials and many are wondering if Miale was basically used as a smokescreen while Jay is the real negotiator.

Adding fuel to the fire is John Thornton, an advisor to Smith. He said that he was in the meetings and “Jay-Z connected with him on so many levels.” Of course, he says was misquoted.

A rep for the Jigga man says he was not involved in negotiations and was in London while all the meetings were happening.

It’s obvious why many athletes, especially a young rooke like Geno Smith, would want to sign with Roc Nation Agency. Jay-Z has crossed over into so many facets of business and is able to gain marketing and sponsorship for athletes as soon as they want to diversify. He’s still totally connected to the music world and many find that life appealing. Plus, he’s still seemingly a really cool guy that people like to be around.

It’ll be interesting to see what the outcome will be of the investigation. There’s been no word on what the fine or punishment is if it is found that Jay-Z and Roc Nation agency broke the NFLPA rules.

Huddah, Denzel and Elikem get the most nominations in the Diamond House