Huddah, Denzel and Elikem get the most nominations in the Diamond House 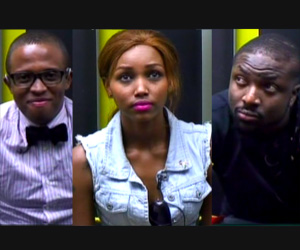 Kenya’s Huddah, Uganda’s Denzel and Ghana’s Elikem received the highest number of nominations in Diamond House. Huddah led the pack with seven Nominations followed closely by Denzel with six and Elikem with four.

The Housemates charged Huddah for being shallow-minded, self-centred and inconsiderate while it seems Denzel has no respect for women, tries too hard and not much of a team player. Elikem on the other hand was shot for being too bossy as well as being a strong competitor in the game.

The lucky lot who dodged the Nominations dagger in the Diamond House were Botswana’s Motamma, Tanzania’s Feza and Nando, South Africa’s Angelo and Ethiopia’s Bimp.

This is How Each Diamond nominated:

Whatever it is that the lucky five washed in before entering the Big Brother House has worked for them thus far. It remains to be seen if their luck will last any longer.