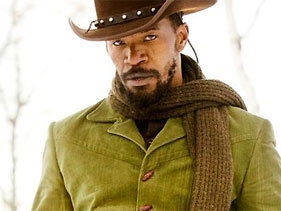 Even if he doesn’t take home the award for Best Male Performance, Jamie Foxx will walk home from the MTV Movie Awards with a trophy in hand.

The star of “Django Unchained” is set to receive the MTV Generation Award during Sunday’s ceremony, after distinguishing himself not just in a variety of movie genres, but in a variety of mediums, including film, music and television.

The actor, whose next role is in “White House Down” opposite Channing Tatum, has already received numerous honors for his big-screen performances, including a Golden Globe, BAFTA Award, Screen Actors Guild honor and Academy Award for his turn as iconic singer-songwriter Ray Charles in “Ray.” But MTV’s award will undoubtedly be the first in his trophy case that looks like the thing his audiences bring with them into theaters: a tub of popcorn.

Ain’t there No Bloggers and Publicists Outside Accra and Tema? – Dr Cryme Asks