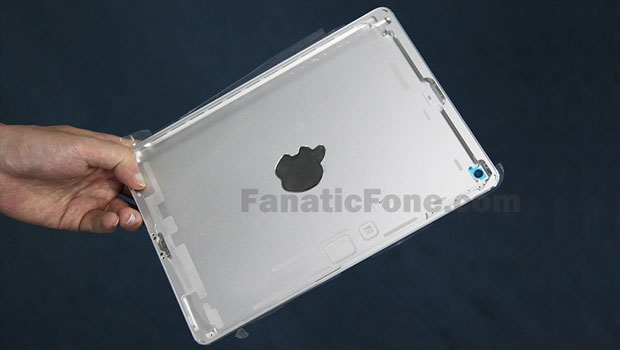 New iPad 5 leaks have claimed to reveal the next-generation tablet’s redesigned back panel, suggesting Apple’s iPad 4 replacement will be considerably slimmer than past models.

Looking set to feature a notably thinner form factor than its predecessor, the latest iPad 5 leaks have hinted that the widely expected tablet will take design hints from the iPad mini and adopt a sleek, flat backed finish.

Hitting the web courtesy of FanaticFone, the claimed iPad 5 components were reportedly sourced from Apple’s supply chain by unnamed sources and are said to feature a number of notable design changes over the company’s past tablet offerings.

While the slim, no longer angled redesign is the most obvious difference, it is suggested that the iPad 5 will be slightly shorter than the iPad 4. Far from adopting a new, smaller screen size, the leaks claim that the refreshed tablet will feature a heavily reduced bezel, just 3mm thick.

Elsewhere the iPad 5 has been shown featuring individual volume up and down buttons as opposed to the current double-ended rocker, the Apple logo has switched from black to silver, and dual speaker grills have been added to the device’s lower edge.

iPad 5 Rumours
Expected to enter the realms of reality in the coming months, the iPad 5 is expected to be part of a bumper autumn new product line up from Apple which will see the iPhone 5S, a new budget iPhone and the iPad mini 2 all introduced.

With incremental specs increases tipped for inclusion alongside the redesigned body, the iPad 5 has been rumoured to see revised camera optics line up alongside a new, faster quad-core CPU and the upcoming iOS 7 operating system announced at WWDC 2013 earlier this year.