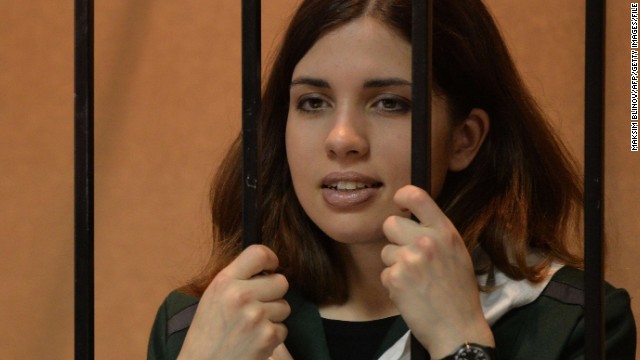 Moscow (CNN) — Convicted Pussy Riot punk rock band member Nadezhda Tolokonnikova has not been heard from since she was transferred from a prison more than 300 miles east of Moscow, husband Petr Verzilov told CNN on Saturday.

Verzilov said his wife was moved to a prison in Chelyabinsk, Russia, on October 24 or 25. She was relocated from a Mordovia prison.

Under law, authorities will inform her family about her transfer within 10 days of her arrival at a different penal colony, the country’s Federal Penitentiary Service’s press office told Russian news agency Interfax on Saturday.

Tolokonnikova was sent to Mordovia last year for her part in a performance of a “punk prayer” critical of Vladimir Putin, who was then Russia’s Prime Minister and is now the country’s President. The performance was held at a Russian Orthodox cathedral.

Found guilty of hooliganism, the 23-year-old musician was sentenced to two years in a penal colony.

She has less than six months left on her sentence, but on September 23, she declared the conditions at the prison to be intolerable and began a hunger strike.

Chris Brown Sentenced to 2 Years Imprisonment According to MTO