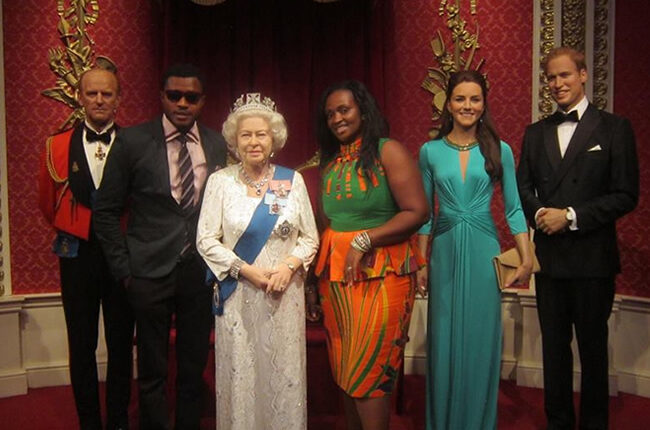 A photograph of Ghanaian gospel singer, Herty Borngreat, and her husband, in a pose with a life-like wax figure of the Queen of Eng­land and her Royal family at the Madame Tussauds museum in London, has generated heat­ed controversy in some circles in the country.

The photos, first published on the musician’s facebook page, ‘Herty Borngreat Music’, caught the attention of some journalists who churned out news reports claiming that Herty had met the Queen, toured the Buckingham Palace and interacted with the Royal Family.

The publications generated uproar and huge controversy on whether Herty was using the photos with the wax images of the Royal family to deceive her fans that she had actually met the queen.

Herty explained that she and her husband, Rev. Daniel Ofori Borngreat, were in London on holidays when they visited the Madame Tussauds museum and took photos with the wax sculptures of Queen Elizabeth II, Prince Philip, Prince William, Kate Middleton, Pope Francis and other renowned world leaders they had admiration for.

She said they had no intention whatsoever of using the photos to deceive her fans.

“It is very common for people to take photos with the wax figures of people in the museum and we also did same just like any other person. Yes, we put one of the photos on our social page and said, ‘God will position you in greater heights in life without much struggle.. .if you believe, type Amen.’ We did not say I met the Queen, so I am surprised people have taken this simple thing and are running with it in a nega­tive way.

“I understand that I am in showbiz and not everyone would like me. But taking the hate campaign to my husband and family is below the belt,” Herty added.