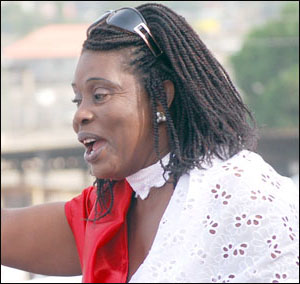 Veteran actress Maame Dokono, aka Grace Omaboe, may consider playing a role in a movie for free if that is what it will take to entice film makers to use the services of veteran actors who have been made ‘redundant’ in recent times.

The 66-year-old veteran actress who is disappointed that old actors have been sidelined told Showbiz last week Tuesday that she was willing to render her services for free if the message of the movie is good.

“I love acting and I am ready to work for free if the story is one that drives  home a good message that will bring about positive change”, she said.

“However, when I say I will work for free, it doesn’t mean I will bear my own transportation to and from location, board and lodge among others. All I am saying is that, I will not charge a fee for my services. Anyway, this doesn’t also mean I will be doing it for free all the time. I will have to get paid at some point in time.

“I need to go back to acting again because I am bored and  I get lonely sometimes. I miss being on set and being in front of the cameras. I miss seeing myself in movies  and I am finding it difficult to understand why film makers do not want to use us anymore.

“ The last time I played in a major movie was about five or six years ago although, I played a mother role some seven months ago in  a short film, a documentary of Ananse. And I am not alone here. Almost all the old actors have been sidelined. They haven’t been on set for a long while.

“Veteran actors are still being used in Hollywood and even neighbouring Nigeria so why can’t it be same down here. Why do they rather want to use make-up and powder to push young ones into elderly roles? And sometimes, they even do a bad job of it so why not use people who are naturally elderly? This just beats my mind”.

According to the mother of six and grandmother of 10, she tried finding out why the old actors were not being used and she was told they were not bankable.

“From my own investigations, I am told the film makers say we are not marketable but I don’t think that is true because there are a few films that have featured some of my old colleagues and they have done well on the market so what are they talking about?

“I also heard we are expensive but that is also not true. So far as I know, they haven’t approached us so how can we charge them? We are not expensive but they should give us something that will make us happy. We can always negotiate.

“ I think the film makers should reconsider their decision not to use the old actors. For some of us, that is all we know and it is also our source of income so being out of work has become very stressful. Most of us have even fallen ill duet to that.

“ You see, going on set can be therapeutic for us. We get to interact with people. We get to talk, laugh, among others. We become active and that is de-stressing enough. We also earn some money to keep body and soul together. This will prevent some of us from going round begging for money and being ridiculed sometimes in the process. I tell you, it has not been rosy for some of us” she said.

Maame Dokono who currently runs a school, Graceful Grace Academy in Adenta said the situation is very bad for some of the veteran actors.

“I am relatively comfortable but I am bored. I get to visit my children and grandchildren abroad but still it can be boring sometimes. I spend my time interacting with my pupils when school is in session but I get really lonely and bored when the kids are on vacation. I can imagine what my colleagues who used to depend solely on acting must be going through this challenging times”, she said.

Despite the fact that Maame Dokono feel sidelined lately, she has no regrets at all choosing acting as a career.  “Acting has taken me to a lot of places and I know I have impacted positively on a number of people especially women and children”, she said.

Maame Dokono who also ventured into radio and TV said that she was trying to get back on TV to do story telling like she used to do with  By The Fireside but it has not been easy. “Getting sponsorship has been a challenge but I believe there is light at the end of the tunnel. One needs a lot of money to come out with quality production and I hope some sponsorship will come my way soon.”

Asked if she would go back to politics, Maame Dokono who tried and lost twice the primaries of the Birim North on the New Patriotic Party(NPP) ticket said she had no plans of doing so.

“You need a lot of money to do politics and I cannot afford that kind of money right now. I tried twice at the primaries and lost on both occasions and I don’t think I want to do that again. I think I will rather help from behind the scenes.

End of Chapter. Bola Ray bows out of Joy FM