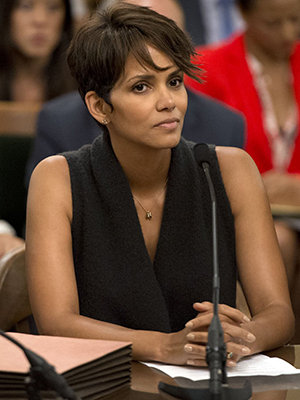 Halle Berry’s daughter is not ready for her close up.

The 46-year-old pregnant actress appeared at the California State Capitol in Sacramento on Tuesday to testify for a bill that would restrict paparazzi from photographing the children of celebrities and other public figures.

The Academy Award winner, who has had so much trouble with pesky paps that she wanted to move to Europe, got personal during her testimony, sharing stories about how her 5-year-old daughter, Nahla, has become terrified of “the men” and fear they may even kill her.

“My daughter doesn’t want to go to school because she knows ‘the men’ are watching for her,” Berry, who said she was speaking on behalf of her young daughter and the baby boy she will soon add to her family, said, according to the Washington Post. “They jump out of the bushes and from behind cars and who knows where else, besieging these children just to get a photo.”

Berry recalled a comment Nahla made to her, saying, “‘They don’t do this to other little kids. Why can’t you do something mommy?’ I have to look at my 5-year-old and say because I have no rights to do anything.”

“The Call” star also talked about the April incident when she and her fiancé, Olivier Martinez, touched down in Los Angeles after a family getaway in Hawaii and were cornered by what she estimated to be 50 photographers. The French actor appeared to lunge at one of the shutterbugs for getting too close, and Berry exploded on them, screaming, “Get away! There’s a child! Jesus! What’s wrong with you people?”

“They were trying to start a fight with my fiancé because if they get a photo of that it’s more money,” Berry recounted, adding that Nahla, whose father is model Gabriel Aubry, was scared for her life. “We get into the car, and my daughter is now sobbing, and she says to me, ‘Mommy, are they going to kill us?’ She didn’t get to sleep until 3 a.m. because she can’t get this out of her mind and she doesn’t understand what just happened to her.”

If the anti-paparazzi bill passes, “The quality of my life and my children’s lives will be dramatically changed.”

Despite First Amendment concerns, the Assembly Public Safety Committee approved the anti-harassment bill. It now goes to the Assembly Judiciary Committee after some modifications are made to the wording so that journalists taking photos or reporting on news aren’t impacted and it targets those people being aggressive, stalking, or recording a child without the permission of a parent.

No doubt Berry’s fears over the paparazzi situation grow as she anticipates the arrival of her second child later this year. She and Martinez announced their baby news in April, and the proud dad let is slip earlier this month that they are expecting a boy.