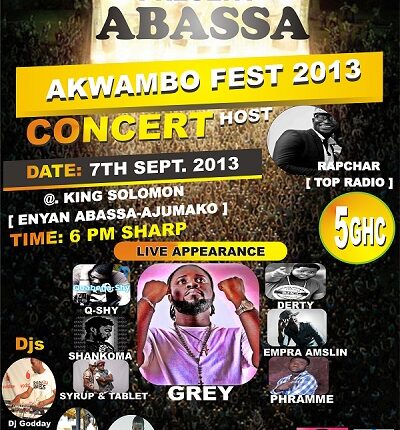 The rapper who recently released his ‘Who A Be’ tune with Edem will be joined on stage for the big concert by Akwapim rapper Shankoma, 3DPyramid artiste DERTY, Empra Amslin, Quabena SHY, Syrup & Tablet, Phramme, amongst others who will be thrilling the township to various tune in a non sto performance.

Akwambo festival is one of the major festivals in the Central region and is highly patronized by people from around the country who join the community to celebrate a successful year of farming. The weeklong festival is climax by the grand concert on the Saturday of the festival, for which organizers Verge Media Consult and Spy360gh has put together the ‘Abassa Akwambo Fest’ concert.

The concert will be hosted by Top Radio’s drive time show host Rapchar Deejay with support from fellow deejays including; Dj Godday of MadTime records, Loopy of Fiesta TV, Dj White from Radio Midas and Smooth Shaker of Hot fm.

Grey who is known for his stage man ship over the years is looking forward to bringing back memories of the olden times and fuse into his new brand as he performs for the 1st time his tunes on stage.