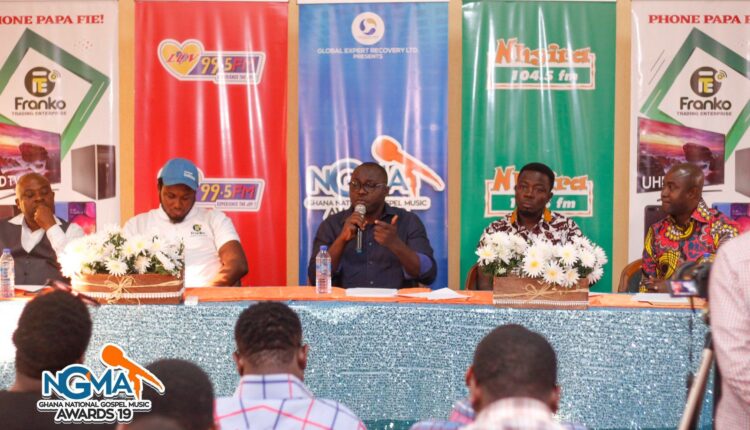 This was made known during a press conference held in Kumasi on Thursday November 7, 2019.

Speaking at the conference attended by Ghana’s Hub For Pop Culture & Urban Entertainment – www.nydjlive.com, Peter Kwabena Dwobeng, CEO of Global Expert Recovery Ltd, organizers of the Ghana National Gospel Music Awards explained the  newly created category ‘Hybrid Gospel Song of the Year’ was meant to reward musicians who are known for all other genres except Gospel music but produced a material worth   categorizing as Gospel music in the year under review.

He also revealed collaborations between   Gospel artists  and secular artists could qualify for the said category.

The newly created categories including Hybrid, Urban Gospel Song of the Year , Gospel Artist of the Year (Diaspora) were just a few of the new changes made by the board of the awards.

Notable among the reviews was the voting pattern.

Unlike the first two editions, the 3rd edition of the Ghana National Gospel Music Awards (NGMA) would see the voting academy wield 60% voting power whereas the general public has a 40% voting power.

The voting academy would be supervised by the  Gospel wing of the Musicians Union of Ghana with representation across the various regions of Ghana.

Again, 15 out of the 20 categories would be awarded on the main night of the awards with the remaining 5 (industry category awards) being presented prior to the main night.

Unlike the 15 categories which would be open to public voting,  the industry categories would be voted on solely by professionals in the  music industry (academy).

Nomination forms for the 2019  Ghana National Gospel Music Awards would be out from November 11, 2019  via its official website www.ngmagh.com   and submissions of entries closed on November 26, 2019.

Nominees list is expected to be released by December 10, 2019 with main event taking place on February 1, 2019.

Present at the launch were Gospel musicians Brother Sammy, Minister Fire and a host of media personalities.

The 2019 Ghana National Gospel Music Awards is supported by Franko Phones with media sponsorship from the Multimedia Group Limited.

Burna Boy Grabs A Nomination At The BRIT Awards 2021

Yaw TOG Is ‘BET Amplified International’ Artist of The…

Where From This Arrogance? You’re A Little Kid – Hammer…

Princess Shyngle Files For Divorce Months After Marrying Her…