‘Game of Thrones’ Stannis Is Alive, According to George R. R. Martin 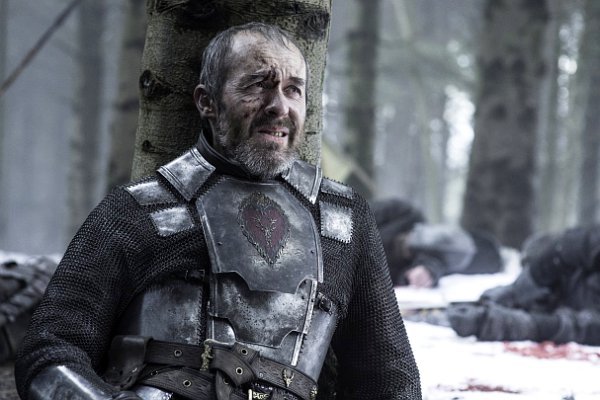 “Game of Thrones” books author George R. R. Martin has potentially dropped a major spoiler for the show. The writer recently revealed what happens to a character whose fate was up in the air as one of the major cliffhangers in the season 5 finale.

At the end of the fifth season, Stannis Baratheon finally came face to face with Brienne of Tarth, who had sworn to avenge the death of Renly Baratheon. It’s believed that Stannis died in the hand of Brienne, though the scene didn’t show it.

In the books, meanwhile, Ramsay Snow spread a rumor that Stannis died, but in a preview for the upcoming “Song of Ice and Fire” book, “Winds of Winter”, Stannis is very much alive. Asked by a fan if Stannis is dead or not, Martin responded, “In my books? Alive, beyond a doubt.”

At the San Diego Comic-Con in July, the episode’s director David Nutter addressed the fate of Stannis. “From the beginning, and [through] the script process, that was the intent – he’s dead,” he said. Despite the director’s definite answer, Martin’s statement has now given fans a glimmer of hope that Stannis is still alive.

Fans have also been speculating about the fate of Jon Snow, who was betrayed and stabbed by his Brothers in the Night’s Watch in the fifth season finale. While Kit Harington who plays the character insisted, “I’m quite dead. It’s over for Jon Snow – at the very least, he gets to join his family and kin and leave this terrible world behind,” numerous evidences have emerged showing him back on set of the medieval drama series.

The new season of “Game of Thrones” is slated to air next spring.

Kim Kardashian May Get Uterus Removed After Birth of Second Child

Revealed! This Is Why Okyeame Kwame Received 30K Cedis From The Ghana Tourism…