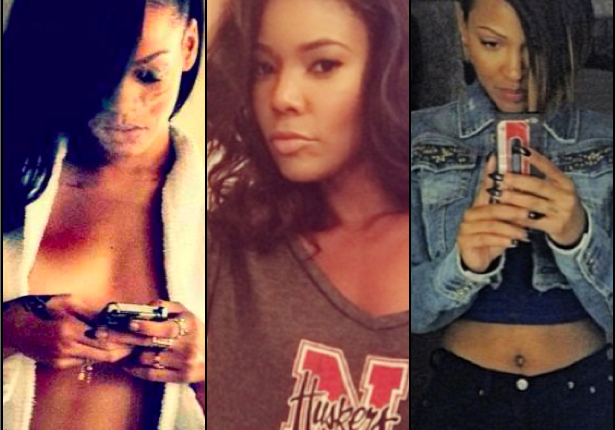 Remember last month when Jennifer Lawrence, Ariana Grande and dozens of other actresses had their nudes photos leaked online after their private information was hacked? Then there was Jill Scott a few weeks later. Now, some of our favs, like Gabrielle Union, Rihanna, Kim Kardashian and Meagan Good have been victimized by the hackers who are out to expose every celebrity woman out there.

Unlike nude photos that are leaked for “publicity,” these photos capture some of these women in their most private moments, which were supposed to be meant for their eyes only, or the men they were dating. They included mainly Face time screenshots, mirror selfies and photos taken of them by their boyfriends.

Gabrielle Union has contacted her legal team and the FBI. She released a statement this morning that read:

It has come to our attention that our private moments, that were shared and deleted solely between my husband and myself, have been leaked by some vultures.

I can’t help but to be reminded that since the dawn of time women and children, specifically women of color, have been victimized, and the power over their own bodies taken from them. These atrocities against women and children continue worldwide.

For anyone out there also being affected by these and other hacking and hate crimes – We send our love, support and prayers. We have done nothing wrong.

Actress Cameron Diaz also spoke out on the nude leaks:

Whoever has done it, they will be caught and made examples of. This can happen to anyone.

If these guys can do it to this group of people then everyone’s vulnerable to it. I think that people really need to look at… how would they feel if it happened to them?

It is believed that the hackers are accessing the photos by hacking into the Icloud accounts of celebrities. Apple has denied that its iCloud system was compromised during the attacks, but is investigating while encouraging their customers to update their accounts with very strong passwords.