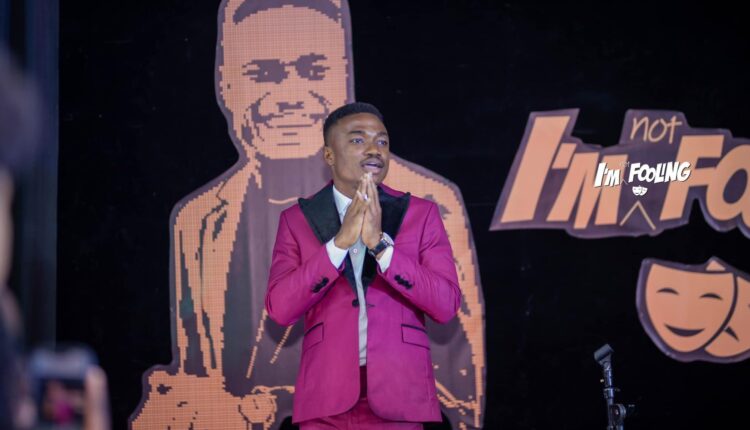 As precious as an album is to an artist, so is a Stand-Up special to a comedian hence Ebenezer Dwomoh, one of Ghana’s most refined comedians who has been building his craft over the years would not leave anything to chance when he first announced ‘I’m Not Fooling‘, a comedy special put together by his company Dwoker’s Card.

For starters, the title of the special seemed absurd especial for a comedy show. However, Ebenezer Dwomoah knew what he was up to.

Paying critical attention to detail, Ebenezer Dwomoh would answer in detail every question regarding the choice of time for the commencement of the show (6:14 pm), the rates (59cedis, 99cedis and 149 cedis for single, couple and VIP respectively) and the title of the comedy special (I’m Not Fooling) which suggested he was indeed not fooling.

Starting off at exactly 6:14 pm on Saturday, August 20 2022 with a well-executed set at the Live Event Centre as advertised, the Gye Nyame Band took the audience who were already seated on a musical journey as they performed incredibly different genres of music.

Comedian Ato Pagh would occasionally budge in with his own freestyle but that was nothing short of amazing as he would take on his wife a couple of times.

The music experience would not end there as former Vodafone Icons star Derrick Music would also prove his worth serenading the audience with an acoustic session.

With the audience already poised for a good night, Ato Pagh announced the official MC for the night and OMG! One could already picture in the mind’s eye the kind of night this was going to be as Clemento Suarez walked in performing a freestyle over a Sarkodie instrumental.

With roaring cheers and applause from the audience, the comedian welcomed the audience and immediately zoomed in on the performances.

The tone was set with incredible opening performances from Pulpit and Jephter, Kojo PJay.

Perhaps the Yaa Asantewaa amongst the guys, Afia Barcelona was a sight to watch. Calm and unassuming, the Sheroe took patrons through a beautiful set that got the audience laughing all through her over 15 minutes performance.

Need I say more about Lekzy Decomic and Oh Joo? Well, you know they would deliver and did nothing short of that.

One person who needs mention is Louis Lamis. Known for his role in the popular television sitcom Kejetia Vs Makola, Judge Louis Lamis made a grand return to the stage but this time as a standup comedian. Although a very short set, it was one for the books.

Ladies and gentlemen, here comes the man for whom many had gathered and what an experience it was!

Looking dapper in a slim-fit suit with matching pants and a white sneaker, Ebenezer Dwomoh mounted the stage dancing to his favourite tunes and delivering as flawless as he could. Typical of a special, he touched on several issues including LGBTQ, music, TikTok, Afrodance, Daddy Lumba and many others.

Interesting to note was how the audience burst into thunderous laughter after every single joke. Although with a plan of doing an hour, Ebenezer Dwomoh ended up doing an hour and 15 minutes with a totally packed house still yearning for more.

With a knack for excellence, the success of I’m Not Fooling comes as no surprise reviews across social media have been positive with many calling for frequent events and at bigger venues.

Present to show solidarity and support were other comedians including OB Amponsah, Jerry Asinyo and more.

An architect by profession, Comedian Ebenezer Dwomoh in a recent interview on BTM Afrika revealed comedy is a form of therapy for him hence pursuing it.

In 2019, he hosted his first-ever special dubbed ‘Seriously Joking‘ on the KNUST campus and played host to Teacher Kwadwo, David Aglah, and Ato Pagh.