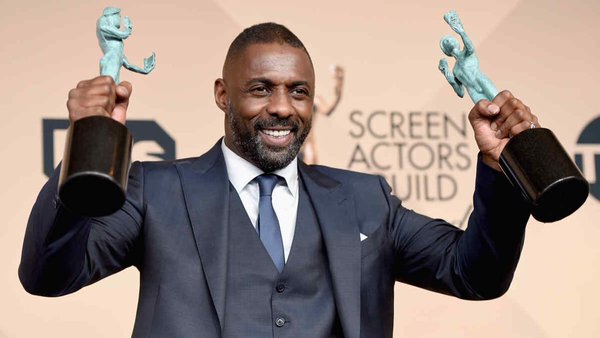 The double win for the British star at the star-studded ceremony follows controversy at the absence of black Oscar nominees, sparking calls for a boycott.

Elba himself recently claimed there is more opportunity and diversity at the car plant he used to work at in Dagenham than on TV in the UK.

There were huge cheers as he was named best male actor in a supporting role for his performance as a warlord leading child soldiers in Beasts Of No Nation.

Collecting his award, he said: “The Ghanaian cast and crew were amazing and worked so hard.

“We made a film about real people and real lives and to be awarded for it is very special because a lot of people were damaged so thank you for giving this film some light.”

Elba then picked up a second award for best actor in a TV movie or mini-series for his leading role in the British detective drama Luther.

Visibly shocked he said: “I don’t know what to say, thank you so much everyone in this room for giving me that.”

Paying tribute to the creator of the show, he said: “Neil Cross is an incredible writer and he writes the darkest show from a lovely little room in New Zealand, I don’t know how he does it.

“I don’t know what to say, two wins in one night. I want to shout out to my children, ‘When Dad goes away I think about you all the time, I love you so much’.”

Orange Is The New Black star Uzo Aduba was named best female actor in a comedy series for her role as Suzanne “Crazy Eyes” Warren in the Netflix show set in a women’s prison.

Queen Latifah won the award for outstanding performance by a female actor in a TV movie or mini-series for Bessie.

Discussing backstage how cinema can match the diversity seen on television, she said: “The public has to continue to demand that, we are in a capitalist society so hopefully supply and demand will kick in.

“People want it, give it to the people. We aren’t here to make movies for ourselves or one per cent of the population, growth is important and change is inevitable.”

Viola Davis scooped the award for best female actor in a drama series for How To Get Away With Murder.

Elsewhere, Leonardo DiCaprio beat UK hopeful Eddie Redmayne to net the outstanding performance by a male actor in leading role award for his performance in The Revenant.

The cast of Downton Abbey was presented with the award for outstanding performance by an ensemble in a drama series, seeing off competition from Game Of Thrones, Homeland, House Of Cards and Mad Men.

Accepting the award, Lesley Nicol, who plays Mrs Patmore, said: “We have been coming here for six years and have only encountered the most amazing kindness and generosity from American actors.

“To be nominated in this category is mind-blowing for us as a British show up against your TV royalty. It’s just phenomenal.”