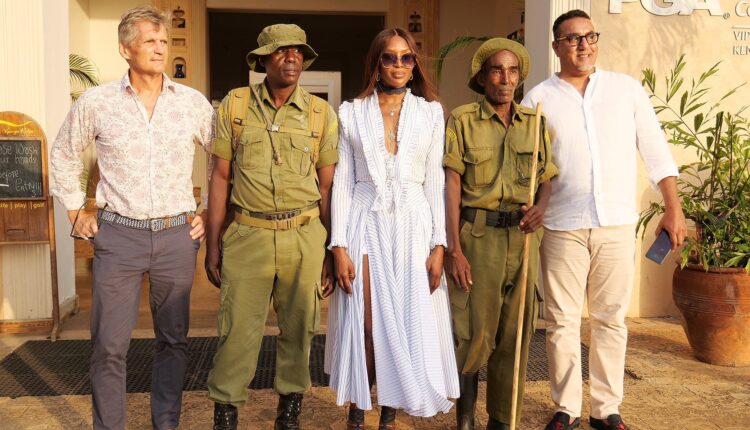 The appointment of British supermodel Naomi Campbell as Kenya’s tourism ambassador has caused a Twitter storm in the East African nation.

Many queried why it had not been given to a prominent Kenyan like Hollywood actress Lupita Nyong’o.

Others leapt to her defence, saying the debate already justified her role.

Kenya’s tourism sector has been badly hit by coronavirus, with visitor numbers down by 72% between January and October last year.

Kenyan Tourism Minister Najib Balala said the deal with Ms Campbell was done over the weekend after he met the model, who is currently on holiday in Kenya.

The 50-year-old style icon and philanthropist has been posting images of her stay on Instagram, where she has 10 million followers.

“We welcome the exciting news that Naomi Campbell will advocate for tourism and travel internationally for the Magical Kenya brand,” Mr Balala said, without giving further deals of the contract.

But the statement, posted on Twitter on Tuesday, prompted instant outrage from some, and the supermodel’s name has since been trending in the country.

One tweeter cited other Kenyan celebrities better suited to the ambassadorial role, including models Ajuma Nasenyana and Debra Sanaipei, as well as Nyong’o.

Let's address this because it's clear it's time for @tunajibu to retire..so Apparently Naomi Campbell is to become #Magicalkenya International Ambassador. #Kenya has International celebrities like Lupita, Debra Sanaipei, Christine Wawira, but he picked a Non Kenyan for this? How? pic.twitter.com/kh6apjooLX

One tweeter said the backlash revealed an unhealthy attitude in Kenya: “At the end of the day, it’s all about who will get the job done. This mentality is what causes nepotism and tribalism in Kenyan institutions, it should be about the most suitable candidate not ‘one of our own’ thing.”

Ms Campbell’s defenders praised her for visiting Kenya several times and said it was not only the model’s social media following that made her the perfect appointment.

Her circle of friends were equally important as she would attract wealthy tourists willing to spend money.

I think Naomi Campbell is the best fit for the Tourism Brand Ambassador role. If you put into consideration the target audience w the 💵.
She's also well versed w the country and has associated herself a few times w Kenya; so she might very well assume that role and excel it. Imo

Shakira Sells The Rights To All Her Songs