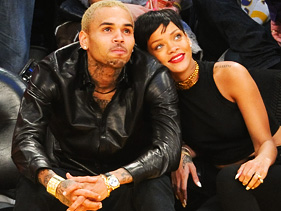 Brown denies he was talking about Rihanna during an expletive-filled freestyle last week in L.A.

Chris Brown is shrugging off his latest club controversy. While partying in L.A. on Thursday, he didn’t just take a shot at Drake when he took the stage at the Emerson Theatre in L.A.; he also offered the room his philosophies about love in the form of freestyle.

In the early hours of March 7, Brown gave an impromptu performance, including a rant that led some people to believe he was talking about his on-again, off-again girlfriend Rihanna.

In a video posted on TMZ, he’s seen preaching, “Every guy in this building has said one thing to their female. If you’re not an insecure n—a and you let her have fun with her friends, I applaud you. You gotta say that one thing to her, and I made this sh– up.”

Battle of Cleavages at AMVCA. Who has the best?

Notorious B.I.G.’s ‘Ghost’ To Star With His Kids In New Cartoon