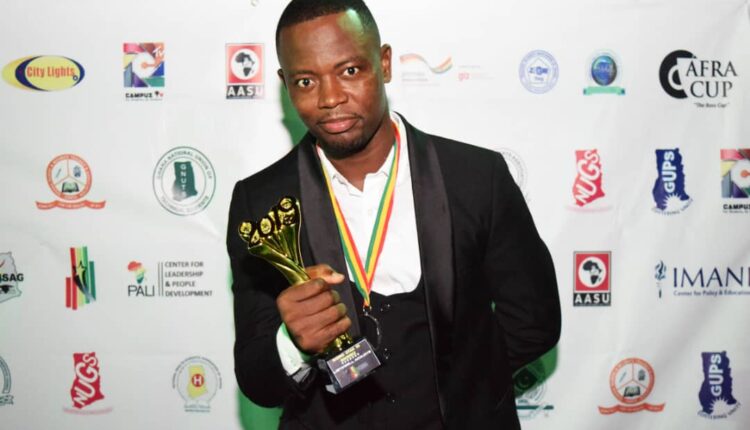 Chosen YesuBa is a fast rising Gospel musician and Spoken Word Artiste whose aim is to impact the youth in Ghana positively through his artistic skills.

Born Listowell Acquaye, Chosen YesuBa also doubles as a Journalist, Blogger and Social Activist who has the poor, less privileged and vulnerable citizens at heart.

The National Students’ Award Scheme which seeks to applaud and promote the outstanding works and achievements of students is an initiative from the joint efforts of all National Student Groups in Ghana that covers from basic to tertiary education and it includes Ghanaian students abroad and foreign students in Ghana.

The Awards also recognizes individuals and organizations contributing immensely to building and further developing the education sector in Ghana.

In the year under review, Chosen YesuBa emerged winner of the “Rising  Star in Showbiz” award among many other outstanding students for making positive contributions in the area of showbiz that directly influenced the lives of students.

He also participated in major tertiary educative programs and embarked on a couple of advocacy projects to effect change in the lives of some vulnerable people in society.

This Award is his third in the year; He earlier won the Best Student Poet & Spoken Word Artiste at the 2019 Ghana Tertiary Awards, Best Student Activist at the 2019 ACEA (African University College of Communications Congress Excellence Awards) and also received a citation for the 2019 “most Supportive Student to AUCC-SRC and School Management”.

Listowell  Acquaye is one of the AUCC 2019 Class of graduates with a Bsc Communications Degree and majored in Development Communication.