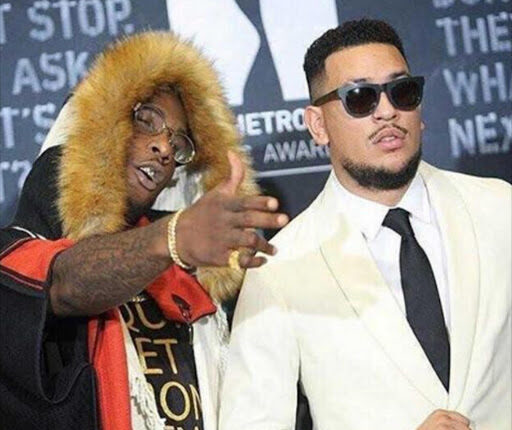 There seems to be raging war among Nigerians and South African rapper AKA on social media.

The African Giant and Nigerian Afrobeats singer Burna Boy has threatened South African rapper AKA over  his Xenophobic comments on Twitter.

Burna Boy who had been off social media for a minute  revealed how disappointed he was especially at a time when he was making all attempts to unite Africa through music only for some South Africans to  run the efforts of many like himself in the mud.

According to tweets sighted by Ghana’s Hub For Pop Culture & Urban Entertainment News – www.nydjlive.com,  Burna Boy recounted how  Nigerians and other Africans rushed to the defence of South Africa during Apartheid  only for them (South Africans) to  rather attack people who defended them and worship their oppressors.

Although Burna Boy states he knew AKA was retarded,  he  asserts he never knew it had gotten that bad. He then issued a threat asking him to have a ‘big security’ the next time he sees him and swore on  one ‘Gambos Grave’ He however admits meeting a  number of amazing South Africans but states they are in the minority.

With the recent developments on Xenophobic attacks in South Africa, an old tweet by rapper AKA  during the African Cup of Nations which sought to  question why Nigerians always triumphed over South Africa popped up with many calling him out.

Just like himself, Nigerian rapper M.I. Abaga and OvieO believe AKA’s tweets have been taken out of context and  misrepresented.

In @akaworldwide ‘s defense, his “sibling rivalry” tweets about losing to Naija were just that. No hate whatsoever. I absolutely detest losing to Ghana, Cameroon or S.A. Doesn’t mean I want their businesses destroyed, or their ppl killed or driven from my country.

Also.. I can speak honestly in saying my bro @akaworldwide loves Nigeria.. taken out of context his tweets can be misinterpreted.. however he loves and respects Naija!!!

Many celebrities around the world have spoken to issue where South Africans are attacking Nigerians in the country condemning the actions.

A number of them include Sarkodie, Davido, Banky W and many others.