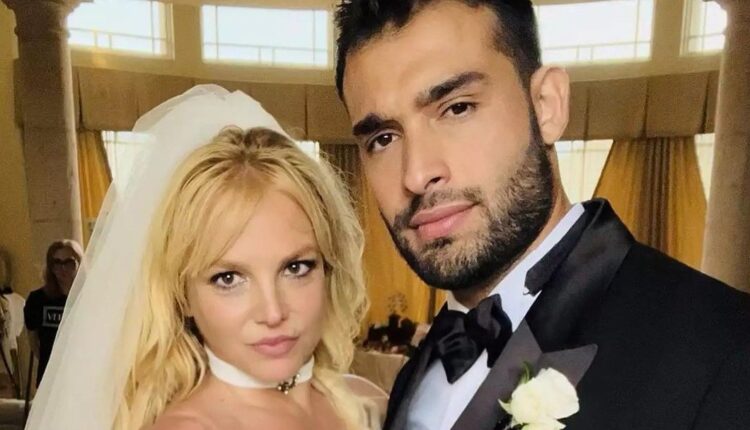 The pop princess completed her outfit with a dramatic satin-edged veil and white choker as she tied the knot at her home in Thousand Oaks, California.

Following months of speculation about who would design Spears’ gown, the singer reportedly let slip in a since-deleted Instagram post last year that “Versace is making my dress as we speak.” The brand’s chief creative officer, Donatella Versace, confirmed her involvement Friday, revealing on social media that her label had also designed Asghari’s tuxedo.

Posting a picture of the newlyweds on Instagram, the Italian designer wrote that Spears held “a very special place in my heart.”

“Designing Britney and Sam’s wedding outfits came naturally to me,” she wrote in the accompanying caption. “A tremendous amount of love was poured into every detail. Together with our Atelier, we created a gown and tuxedo that exudes elegance and glamour. They look just perfect together!”

With its classic silhouette and three-meter-long (10-foot) train, the design featured a plunging neckline and capped off-the-shoulder sleeves. The gown’s fitted bodice was pleated in the front, while the skirt split into a deep V-shaped leg slit.

A representative for Versace told CNN that Spears also wore tulle gloves embellished with pearls and a pair of white satin pumps. The gown took the fashion house’s tailors over 700 hours to produce.

Spears accessorized with 62 carats’ worth of diamonds in the form of a tennis necklace, tennis bracelet and tear-drop earrings, according to Vogue. Her bridal makeup was the work of British makeup artists Charlotte and Sofia Tilbury, with the former telling the fashion magazine that she was “thrilled and honoured” to work with Spears on her wedding look.

According to Vogue, there were three outfit changes throughout the evening. Spears later appeared in a red mini dress, a black mini dress and a two-toned outfit — all of which were designed by Versace.

Asghari, who met Spears on the set of her “Slumber Party” music video in 2016, meanwhile wore a black wool tuxedo to the ceremony. His suave Versace jacket featured silk-satin details and was paired with a white shirt, black loafers and black silk bow tie.

Spears’ wedding dress bore some similarities to the one she wore to marry Kevin Federline in 2004.

On that day, she opted for a classic, strapless satin wedding gown by Filipina American bridalwear designer Monique Lhuillier, and later changed into a white lace mini-dress with a high neck and open back.