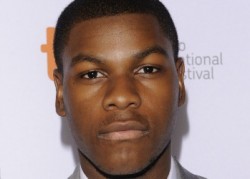 Despite early reports that Star Wars: Episode VII cast was being considered with a number of big names including Oscar winner Lupita Nyong’o, the 12 Years a Slave star didn’t make the final cut as the folks over at Lucasfilm Ltd. unveiled the cast of the highly anticipated sequel which includes British-Nigerian actor John Boyega.

Director J.J. Abrams says, “We are so excited to finally share the cast of Star Wars: Episode VII. It is both thrilling and surreal to watch the beloved original cast and these brilliant new performers come together to bring this world to life, once again. We start shooting in a couple of weeks, and everyone is doing their best to make the fans proud.”

Star Wars: Episode VII is being directed by J.J. Abrams from a screenplay by Lawrence Kasdan and Abrams. Kathleen Kennedy, J.J. Abrams, and Bryan Burk are producing, and John Williams returns as the composer. The movie opens worldwide on December 18, 2015.

Boyega was born in Peckham, London, to Nigerian parents. His first role was that of a leopard in a play at his primary school at the age of five.He later took part in various school productions and attended classes at Theatre Peckham.

In 2011, he won Most Promising Newcomer at the British Independent Films Awards with Attack The Block.His recent award was in 2012 where he was awarded Best Actor in a Leading Role – Comedy at the New York Film Academy Awards.

Worth Reading!! How to wash a penis