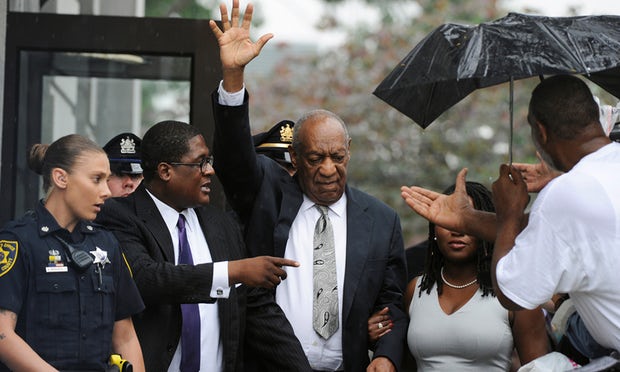 A mistrial has been declared today in Bill Cosby’s criminal trial for the 2004 rape of Andrea Constand. The decision has for now spared the once-beloved actor from a potential decade behind bars, and comes at the end of over 50 hours of deliberation by the jury in Norristown, PA, which first went to Judge Steven O’Neill on June 15 to say it was deadlocked – at that time he told them to “try again,” which they’ve done for the past two days.


After just over an hour of deliberations on Saturday, the jurors informed the court that they were still “hopelessly deadlocked” on all the charges.

“After 52 hours of deliberation, probably one of the most courageous acts I’ve ever seen, I’m compelled to grant a mistrial,” said Judge O’Neill to the packed courtroom. Constand and several police officers who worked on the case were in the courtroom when the mistrial was announced today, as was Bill Cosby.

Not that this is all over for the 79-year old Cosby – at least not yet. Within minutes of the mistrial being declared, the Montgomery County District Attorney’s office announced in court and online that they will retry the case.

DA Steele announces we will retry this case.

The decision by O’Neill to end the legal purgatory could see D.A. Kevin Steele’s office seek an entirely new trial before the end of summer. Steele has four months to decide how he wants to pursue a new trial with a new jury for the current three felony charges of second-degree aggravated indecent assault or new ones. On June 16 in court, after a question from the jury, O’Neill made sure that Cosby understood he could be tried again if a mistrial was declared – the actor said he understood.

After How Many Years? Asem Says He’s Sorry, Apologizes For ‘Fylla’