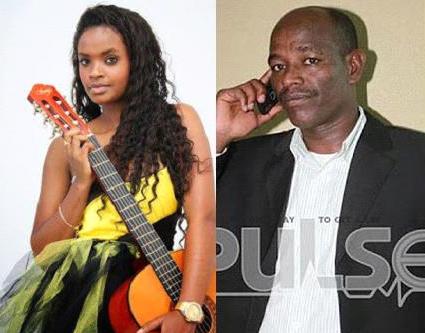 Share
Dillish’s mother, Selma Pashukeni has confirmed that the Kenyan ex-soldier Abdi Galgalo Guyo who claims to be Dillish’s father is indeed is the BBA winner’s real biological dad.In a Google hangout organized by the Kenyan Embassy in Namibia and the Standard Group, Selma and Guyo were able to talk to each other for the first time in close to 23 years.

The hangout was witnessed by the Kenyan Ambassador to Namibia, Peter Gitau, Dillish’s uncle and aunt.

According to SDE, emotions ran high as Selma positively identified and recognized the former KDF soldier. The two former lovebirds took a stroll down the memory lane as they relived their last moment together at the airport where they last saw each other.

Guyo explained that while he tried his best to keep in touch, his hectic army schedule and the extremely slow communication modes hindered him from communicating.

Dillish’s uncle was quick to remind Guyo to visit Namibia with loads of money as gratitude for all the work he did raising up Dillish in Abdi’s absence.

In the end, Guyo was invited to Namibia to celebrate Dillish’s 23rd birthday on the 16th of September.