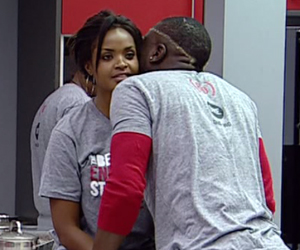 As the weeks roll by and the number of contenders for the USD 300 000 dwindle, relationship dynamics change.

Elikem has struck a cute friendship with Cleo. On Sunday night, the two sat in the bedroom chatting up a storm, while their fellow Housemates lamented Oneal’s departure in the Jacuzzi.

One other Housemate that is Dillish. The two have been consistent in running around the House and playing like little kids. After Dillish crowned herself a princess, Cleo and Dillish started calling Elikem a prince from a magical land. Whether this is an attraction that goes beyond friendship is a story for another day. After the gang wrapped up their discussion about the USD 300 000 prize, Elikem whispered in Dillish’s ear and told her “I’ll buy you a Golf 7,” while Dillish told the Ghanaian “I’ll buy you a new bike.”

We know by now that Elikem’s heart is firmly set on Pokello, but could these two be feeling each other? From their interactions, it would seem there is a mutual attraction. However, Dillish has made it no secret that she has a man back home and wouldn’t hook up with anyone in the House.

Elikem on the other hand is smitten with former Chasemate Pokello. If we had a dollar for every time Elikem has shouted “Pokello!” into the cameras, we’d be filthy rich.

Do you think Dillish and Elikem could be feeling each other but both know they can’t do anything about it because of their commitments and attachments?

Feature: I Say Without Apology, Delay is A Big Fat Liar!!