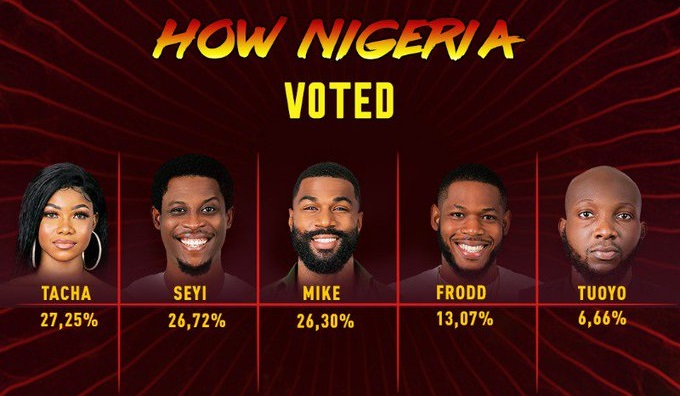 Life is full of surprises and the Pepper Dem gang are not excused from it.

From the moment Ebuka announced their fake Eviction from the BB Naija House, Seyi and Tacha’s names have been on the lips of their fellow Pepper Dem Housemates.

Their exit from the House gave the rest of the Housemates room to express how they truly felt about them and a couple of them didn’t hold back.

After being put up for Eviction twice, Tacha already got the message loud and clear a long while ago that the Housemates weren’t fans of her. “They see me as a threat and they want to get rid of the threat,” she said during her Diary session shortly before she was fake Evicted.

What was most surprising was how easily they all moved on after Seyi’s exit with little being said about him. One would think he left a lasting impression to be missed long after he was gone, but that isn’t the case.

We’re not expecting a happy get-together but hearing what their fellow Housemates had to say about their exit, we don’t know what to expect from Seyi and Tacha’s homecoming.

The Sun Describes Beyonce’s The Lion King: The Gift A Flop (DETAILS)