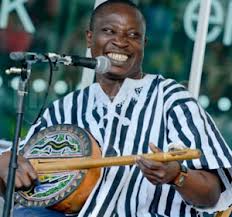 The No Beer in Heaven hit-maker argued  that  indigenous northern Ghanaian  music was  comparable to  award-winning songs from other parts of the continent   that had gained international recognition.

“The problem we have here is that we disrespect our own music.  If you listen to northern music, you will realise that we are mostly on the track of the likes of Youssou N’Dour, Salif Keita,  Baaba Maal and Manu Dibango,” Atongo said during an  interview in Bolgatanga.

“Music from the northern Ghana is the type Europeans want to hear. Northern music is authentic and organic and must be promoted, ” he said  adding that  he was ready to contribute his experience  to support initiatives that soaght to reposition indigenous northern music.

Atongo Zimba, together with the famous King Ayisoba and 2012 MTN Hit-Maker finalist, Atimbilla among other artistes,  performed  last Saturday at the Kofi Charlie Floor of the Bolgatanga Catering Rest House.

Atongo Zimba and King Ayisoba lit up the night and treated patrons to some good kologo tunes that got patrons out of their  seats to shake off the biting cold associated with the harmattan weather.

The show sought to relive the hey days of  the  defunct Uppers International Band and start a process of reviving the band.

Musicians such as Christy Azuma, Nat Awuni and Sammy Young all played for the government- supported band that broke up after the demise of the Kutu Acheampong military regime.

Alhaji Mohammed-Muniru commended the organisers of the programme  for their initiative to revive the entertainment  scene in the region and pledged the support of th Upper East Regional Coordinating Council.

He was hopeful that with the support of all, such success could be replicated.

Mr. Beautiful is Not A Marketable Actor – Movie Producer Affirms