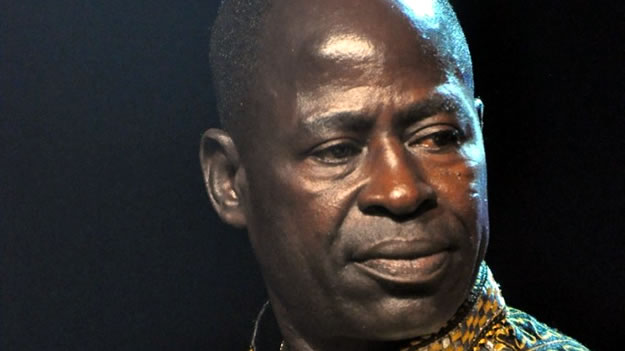 First timers at an Amakye Dede  live concert must have walked away from the Accra International Conference Centre last Friday with a poor impression of the veteran highlife musician.

For such a well-organised and well-publicised Black & White concert at which Amakye Dede was considered to be the star performer, the “Abrantie”, as he is fondly called, slipped badly.

He was straining a bit too hard, he was missing his cues with the band, he spoke too much and could hardly stay on his feet.  This was hardly vintage Amakye Dede.

Yet Black & White survived through a downpour of rain and on the wings of finer performances from Samini, Castro, George Jahraa and young Kwabena Akwaboah.

Samini was a thrill to watch and listen to. He knew exactly how to work up his audience. Right from the moment he stepped on the stage, he carried everyone along and finally when he tucked into his trademark freestyle rendition, the audience, especially the ladies, were virtually in a swoon.

Castro was similarly thrilling in his performance, playing so comfortably with a live band and going through the paces he knew would get his fans excited.

Unfortunately Guru, the Lapaz Toyota singer did not quite gel with the audience as he performed poorly screaming off-key over a recorded playback.

The producers of the Black & White concert, Event Factory, may not be a familiar name in Ghana but last Friday, they demonstrated such a high degree of organisation that it will not come as a surprise if they soon become one of the best.

Conceded, they took off two hours behind the publicised time but the programme ran smoothly to the end once it started. Again their set design  was particularly innovative and equipment wise, they also scored marks.

My Assets Are Natural – Peace Hyde