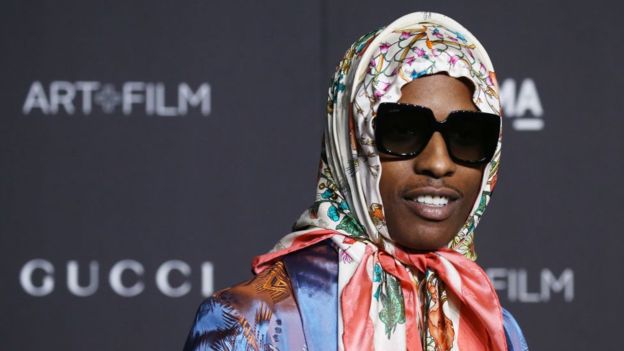 A$AP Rocky is a suspect in an alleged shooting incident that took place in November 2021.

According to TMZ,  A$AP Rocky was arrested as he flew into LAX Wednesday morning. The rapper is said to have flown into Los Angeles from Barbados on a private jet, where he was met by cops at the terminal and taken away in handcuffs.

It is reported that the arrest stems from a November 6, 2021 incident, where an alleged victim claimed Rocky shot at them 3 or 4 times grazing his left hand.

Cops say A$AP knew the alleged victim, and the alleged shooting happened after an argument between the two. The LAPD says they worked to corroborate the info the victim told them about the alleged incident, which helped them to identify Rocky as the suspect.

Rocky and a pregnant Rihanna left for Barbados days after rumors went wild that the two had gone their separate ways after alleged cheating.

Louis Pisano, the man at the centre of the much rumoured Rihanna-A$AP Rocky breakUp rumour has apologized for causing the parties involved irreparable damage.

In a new tweet shared on Saturday, April 16, 2022, the tweep believed to be in the fashion industry issued an apology describing his earlier decision to tweet unverified information as “dumb.”

Prior to his apology, Loius had sworn his information was valid as he would not put at risk his career in the fashion industry.

It is immediately unknown what legal action the couple is taking but reliable information suggests the couple are in contact with their lawyers regarding the matter.

Earlier, Amina Muaddi, the lady purported to be involved in the alleged cheat rumour also shut it down herself, calling all the speculation an “unfounded lie.”

“I’ve always believed that an unfounded lie spread on social media doesn’t deserve any response or clarification, especially one that is so vile. I initially assumed that this fake gossip – fabricated with such malicious intent – would not be taken seriously.”

“However in the last 24h I’ve been reminded that we live in a society that is so quick to speak on topics regardless of factual basis and that nothing is off limits. Not even during what should be one of the most beautiful and celebrated times in one’s life.”https://www.youtube.com/watch?v=mumSFH5zqnk“Therefore I have to speak up as this is not only directed towards me but it is related to people I have a great amount of respect and affection for. While Rih is continuing to live her serene, best dressed pregnancy life and I go back to my business – I wish everyone a beautiful Easter weekend!” Meanwhile, Rihanna and A$AP Rocky have taken a baecation to the former’s homeland Barbados where she intends to deliver. A new video seen online sees the couple at an airport terminal in Barbados Friday — where they’re shoulder-to-shoulder, and eventually … waist to waist, thanks to Rocky’s wrap-around with his arm.

The couple got together back in November 2020 after being friends for years before hooking up. Rihanna dropped her pregnancy announcement back in January of this year.