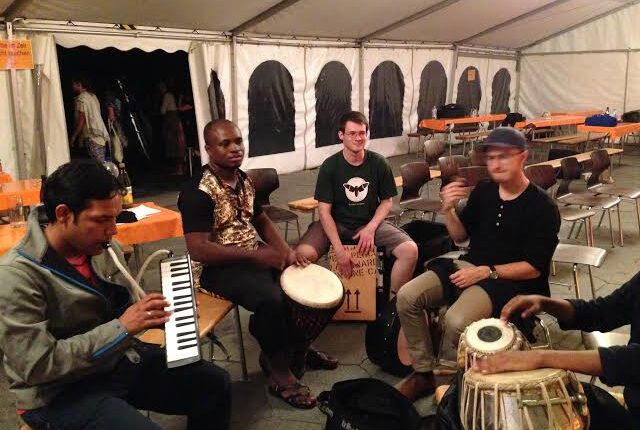 The International Folk Music Festival 2014 (aka Ethno Germany 2014) is ongoing and one Ghanaian who is making Ghana proud in Germany is Akesse Sanza as his good deeds have gained massive recognition at the event.

He is part of the teachers who are teaching the participants on Ghanaian traditional folk songs and tunes. His effort has pitched him as one of the most popular persons in the camp.

He had his turn to show the world the beauty of Ghana’s rich culture on the 14th of August at the Castle Lichtenberg. His performance came along with other musicians from 12 countries in a concert.

Ethno Germany 2014 is a folk music camp for young musicians from all over the world.

The event held between the 8thand 15th of August 2014, and had about 35 enthusiastic participants who gathered at the beautiful Castle Lichtenberg near the town of Kusel.

The week-long festival, saw participants get to know each other, exchang ideas and shar experiences. But most of all, they explored diverse cultural backgrounds and reinvented traditional music.

Speaking with the media on his experience at the event, he said, “I play Djembe drum and I have gotten the chance to learn Violin at the camp. It was exciting to hear people from other countries play and sing our songs.”

“In addition to some of the tunes I heard them sing, they enjoyed and joined me to play our folk songs on the evening of 14th at the Concert at the Castle of Lichtenburg. That moment made me feel on top of the world. The experience will never be the same,” he added.

The countries that represented at the festival aside from Ghana are Cameroon, India, Germany, Chile, Cyprus, Croatia, Austria, Sweden, Scotland, England, Denmark and South Korea.

Who Watches The Watchman? A Case of Sarkodie against the Ghanaian Media