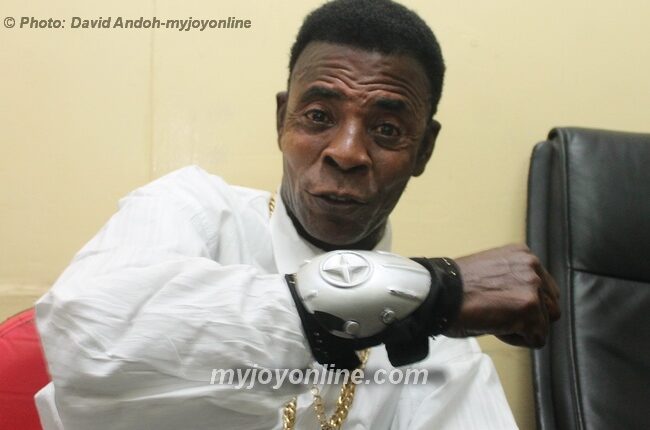 One of Ghana’s comic actors, Kingsley Kwasi Kyeremateng also known as Ajos, says he sympathizes with the Asantehene, Otumfuo Osei Tutu II for the ornaments he has to wear anytime he attends a function.

Speaking on Asempa FM’s programme, “Abrabo” Wednesday, Ajos said his is worried because, based on experience, he can tell that Otumfuo’s jewelries are heavy and would be tiresome wearing them.

The comic actor was sharing his experience on the usage of heavy necklaces he is usually noted for when he appears in public.

He says even though he enjoys appearing in oversize clothes and big necklaces, he sometimes do not fancy wearing them because they are heavy.

To get the kind of unique look he wants to portray, he has contracted a female designer to sow his comic-looking attires.

Touching on a variety of issues, Ajos vehemently denied rumors that he has bleached his face. He said the secret to his light skin is attributable to treating himself to good bath.

The veteran Akan Drama actor complained of not getting movie roles in recent times but said he has no regret joining the acting field.

He indicated that he has no intention of retiring from acting, and called on movie directors to make good use of him.

Unknown to many, Kingsley Kwasi Kyeremateng is a literate, and can therefore read and write.

His famous name, Ajos, was derived from a security role (gate man) he played in Akan Drama series.

Meanwhile, he has advised that public figures must learn how to manage their anger especially, when they appear in public.

Stunner: Facebook To Buy WhatsApp For $19 Billion In Cash, Stock