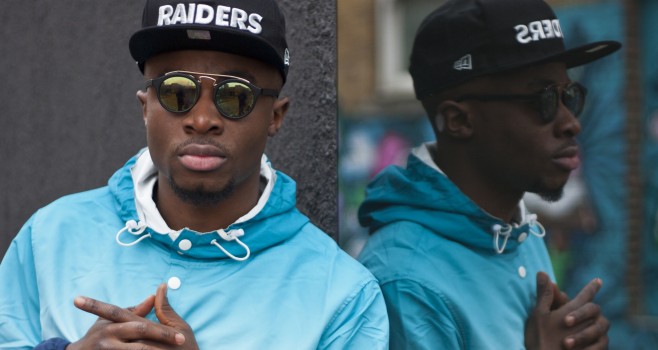 A carefully crafted story by Alexis Stephens on www.mtviggy.com talks about FUSE ODG nad his movement “This is new Africa”. This Is New Africa, T.I.N.A for short, will be the name of the next album by British-Ghanaian pop star Fuse ODG. But the declaration is more than just a title. The mantra is embedded in Fuse’s infectious singles and videos. It’s the snapback with African print that Wyclef Jean wears in the official “Antenna” video. It’s Fuse’s slim-fit fashions and how hard he waves Ghana’s flag.  It’s his fans azonto dancing in the London Tube to dazzled straphangers. Most importantly, New Africa is the sound of Afrobeats, the West African hip-hop/dance fusion that Fuse ODG, born Richard Aboina, performs.

His two massive singles “Azonto” (2011) and “Antenna” (2012) have been wildly more successful than expectations. A viral video of masked dancers shimmying to “Azonto” around London has gotten more than 10 million YouTube views. “Antenna,” his most recent single, peaked at #7 on the UK singles chart just a few weeks ago. These numbers might not even reflect his true reach as fan videos of his songs have millions of views themselves. “Antenna” is a go-to summer jam that has African and non-Africans, young and old, congregating on dance floors at birthday parties, weddings, picnics and nightclubs across the world. It has a universal happy-go-lucky appeal, inspiring comparisons to PSYs “Gangnam Style.”

Humble, yet incredibly focused, Aboina is aware of the frontiers that he’s crossing. “Some of the stations that we’re getting played on over here have never played Afrobeats before. The closest that they’d ever got was D’Banj’s “Oliver Twist.” But the way that “Antenna” has crossed over, no other song has crossed before.  I’m hearing white girls in the crowd at my concerts screaming “African lady, you know you drive me crazy.” I’m like, “Yo, this is crazy!””

This is in stark contrast to how much African culture was looked down upon when he was growing up in England. Abiona was born in London, moved to Ghana for primary school and returned to the ethnically diverse South London town of Mitcham for high school (a biographical arc mirroring former Mitcham resident M.I.A.). He professes to have felt alienated from his classmates and his culture, saying, “The black community wasn’t that strong, especially the black African community. I didn’t feel like there was anyone that I could go to that would make me feel proud to be African. I had a lot of fights in school just because I was African and had an African accent.”

As a diversion, he immersed himself in music, listening to his parents’ Ghanaian highlife, but also to hip-hop, reggae, bashment/dancehall, grime, and even rock. He was once the frontman for a rock band called Ampersand that used to play the London pub circuit. Aboina also dabbled in hip-hop production and emceeing, but in 2009, decided to focus on a professional music career. Two years ago, he made the conscious decision to focus specifically on making authentic Ghanaian music and bringing it back to the UK. “It’s a whole new Africa out there, but the world can’t see it,” he says, reflecting on how rich and modern the continent’s music industry has become, to little international fanfare. He contacted the popular Ghanaian hip-hop producer Killbeatz on Twitter and decided to travel to record with him in Ghana and soak up the budding Afrobeats scene there.

For those who have not been following MTV Iggy’s coverage, Afrobeats is a catch-all term coined in the UK that refers to different rhythms and dances percolating in the dance underground of Ghana, Nigeria, and the UK. It is propelled by African percussion, crisp hip-hop production, exultant pop synths with velvety Auto-tuned rap-singing drizzled on top. One of the styles that has fallen under this category is azonto, a rhythm and dance based on Ghanaian forms such as Kpanlogo and Gawu. Features of the dance include a signature knee-swivel, floor-and-sky jabbing, and the mimicking of everyday activities.

When Aboina arrived in Ghana, hits from artists like E.L., M.anifest, and Sarkodie were all the rage. “Everyone was doing azonto. Whenever we started making a hit, everyone in the studio wanted it to be an azonto hit. I was really curious about the dance. It was so fun, I wanted to bring it back to the UK. We decided to make a song about it.” He brought Killbeatz and guest MC Itz Tiffany to London to record his single “Azonto” and after its release, it took on a life of its own over the internet. “We shot the viral video to it and it flew,” he says. “Azonto” instantly started racking up millions of YouTube views, home-shot videos began sprouting up, and celebrities like Ghanaian and UK soccer stars started dancing along to his song—along with UK Prime Minister David Cameron.

The success of “Azonto” led Fuse to the clever promotional tool for his next single “Antenna.” He released the audio for the song as a free download along with a YouTube video instructing teams from around the world to create videos of them azonto dancing to it tagged #AntennaDance. The winners would get a cameo in the official video. The competition took a life of its own as teams from around the world got unbelievably creative. #TeamSwitzerland formed a black-costumed flash mob in a Bern train station. #TeamKenya featured two young women dressed as large-chested, barefoot, bubble-bootied African grandmas getting down (while cleverly referencing outdated African stereotypes). Two charming young men in black suits and ties suavely tore it up in a London subway car repping  #TeamLondon. Nonetheless, the clear winners of the contest, the man-woman duo #TeamManchester, had the most devastatingly cunning choreography, dancing and video editing deserving of a feature in any music video. The adorable pair also has the style and class so emblematic of what “new Africa” might look like that it almost brings tears to one’s eyes.

Even he couldn’t believe the response to the #AntennaDance contest, saying, “To me it was an eye-opener to how powerful music can be. It was so overwhelming. I mean, I knew it was going to do something because people were getting into my music, but in terms of the territories that were crossed and the amount of videos that were being uploaded every day. I felt like, “Wow, this is why I’m doing music, to connect the diaspora across the world.”

Abiona didn’t just feature #TeamManchester in the official video, but also #TeamLondon, and #TeamBedford beside guest rapper Wyclef Jean. While the cresting popularity of Afrobeats has a lot to do with Fuse ODG’s success, the roots of Abiona’s formula come from an unexpected and even more aggressively heart-warming place.

Around 2006 (well before his recent fame), Abiona and friend (now manager) Andre Hackett founded the Escape Youth Project, a program employing at-risk young adults to teach music, dance, theater, and poetry to other children and high school students. Abiona ran the group’s music studio at the same time that he was pursuing his own music career. Facing funding challenges, the program later expanded to include a for-rent mobile recording company, London Mobile Studios.

Hackett and Abiona also produced music videos for Escape Youth Project members, channeling their talents and keeping them off the streets. In the video for “DA 360,” young people are skanking, popping and locking in a graffiti’d schoolyard to an early Fuse ODG UK Funky track—a predecessor the participatory spirit and positivity of his recent videos. Alumni from the program have ended up members of his Off Da Ground crew, the ODG in Fuse ODG. It’s an improbable and inspiring give-and-take that Abiona considers a long-term project. “In the UK, the unemployment market is a bit depressing at the moment and it’s been depressing for a couple of years, so whenever you get the opportunity to hire other young people to work, you do that.”

Even with his success, one of his biggest challenges might still be fitting in. On the one hand, he’s achieved accolades all over: he is the first Ghanaian star to reach #1 on iTunes and also the first UK artist to win two categories at the Ghana Music Awards. On the other, he doesn’t quite fit into neat music industry lanes. He admits, “It’s even hard for people to put me into a category at the moment.  I’m based in the UK, but I’m making Afrobeats. Which category would you put me for award shows? Best African Act or UK Artist of The Year?”

Another way that he might not yet fit in is his clean-cut appeal. Even though he oozes swagger, he lacks the swarmy edginess that one expects from stars that have a similar international marketability, like Pitbull, Sean Paul, or Akon. Also, while Abiona has successfully broken barriers in the UK, he’s aware that he has significant challenges ahead if he’s interested in achieving popularity in the United States. He says, “I’m interested in breaking the world, because more territories that we hit, the more that we’ll be able to spread the message about the New Africa and the more we’ll be able to project Africa in a new light. I really think the US is way behind in terms of Africa. I get angry when I hear some of these American artists talking about Africa. They have no idea of what the continent is about.”

Regardless of whether or not the United States becomes another territory that Abiona can cross off his list of achievements, he can claim at least a small role in the sea change in the idea of what it means to be African in the United Kingdom. “A lot of young people right now feel proud to be African. Africa’s the new thing right now. To me it’s more than music, its changing lives. It’s making African soul a part of who they are.”