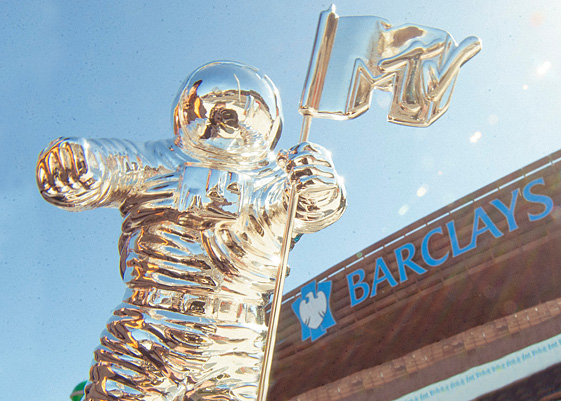 Yes, its true–MTV’s Video Music Awards is changing locations for 2013. The ceremony is usually held in New York or Los Angeles, and this year— instead of Radio City Music Hall— Brooklyn’s Barclays Center will be host to music’s biggest names.

Here is the official release from MTV News:

Following an exhausting cross-country journey, the Moonman has landed.

After hopping on a plane at Los Angeles International Airport Monday morning (March 25) and winding his way through New York City, the iconic symbol of the MTV Video Music Awards has just touched down at his home for 2013: Brooklyn’s Barclays Center.

Yes, this year’s VMAs will take place on Sunday, August 25, at the home of the Brooklyn Nets.

But you probably already knew that, if you’ve been following the series of selfies the Moonman posted all morning using the hashtag #RoadToTheVMAs. The long day’s journey into BK began at the crack of dawn on the West Coast at LAX, where Moonie hopped a plane, departing his home for the past three years.

He touched down at noon at JFK International Airport, then jumped in a cab, zipping over to MTV’s Times Square headquarters where he hung around for about 15 minutes before hopping on a Brooklyn-bound D train.