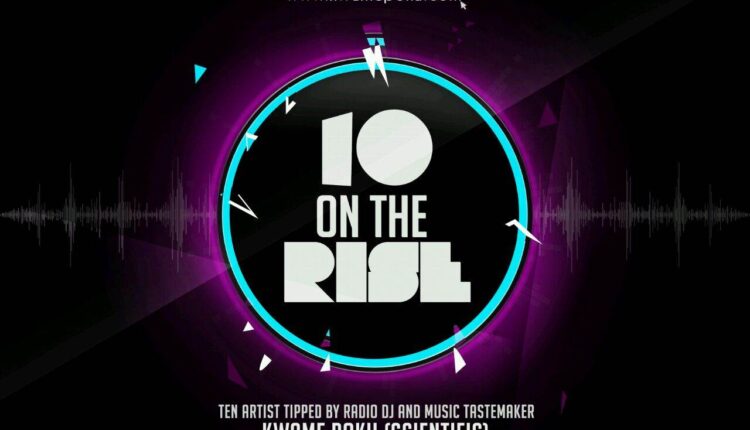 In a creative environment where talents are unearthed virtually every time, it is worth noting that not all these artists can make it to the top. This could be through no fault of theirs.

However, music taste maker and host of Y Lounge on Kumasi based YFM Kwame Poku aka scientific has tipped 10 emerging artists who he believes could be making waves with their music in 2015 should they stick to their game and even up it.

Now in no particular order these are the 10 artists he tips to make huge impacts music-wise in 2015.

The Takoradi born musician, Pappy Kojo hugely made a mark with his chart topping song ‘realer no’ with Joey B in 2014.

The video for realer no has since had over 24000 views on YouTube.

He currently has a new single “Ay3 late’ out with one of Ghana’s finest rappers Sarkodie.

He has signed an endorsement deal with international casual footwear Crocs that shows the influence Pappy Kojo has a celebrity and rapper in Ghana.

Sticking to the music genre that got Ghana to know him, he could be headlining major shows this year.

The younger rapper who calls himself Young Daddy Lumba out of his love for Ghanaian hilife legend Daddy Lumba. Last year Kojo signed onto the BBNZ Live record and released a free album called The Shinning.

Now label mates with EL, Kojo has collaborated on songs with Sarkodie, Mensa.

Working with label mates EL, and collaborating with rappers like Sarkodie, Manifest or Obrafour can have a huge impact on his career this year.

A resident of Nima in Accra, Rashid Mettal is one of the fast rising dancehall acts in Ghana now.

His song ‘No noise (Baafira)’ a remix of Stonebowy’s song since its release in 2014, has become viral and a huge radio hit.

Getting featured on songs with Ghana’s dancehall giants Stonebowy, Shatta Wale or Mzvee could be a great launch pad for Rashid Mettal’s music this year.

Winner of the 2013 edition of GH One’s ‘The Next Big Thing in GH Hiphop’, Strongman has won the heart of the youth with his versatile rap.

Last year Sarkodie was full of praise of him, when he released a song called “Who said Tweaa”.

Sarkodie has featured him on a new song “3ny3 de3 ehia ni”.

Being on a song with Sarkodie can be a huge break for Strongman this year, a few more songs with some of Ghana’s finest rappers will wonders for him this year.

A Member of the Higrade Family, Kofi Kinaata made a huge statement as a good rapper when he featured on Castro and Asamoah Gyan’s “odo pa”.

In december last year he featured Samini on his song “Fanti rap god” and he got featured on “The Definition” with Sarkodie, Yaa Pono, Jayso, Edem & Opanka.

His Fante style of rap and being able to do different genres makes him stand out, Kofi Kinaata releasing good songs and getting featured on songs with popular musicians, he will have successful year.

Fresh off making a huge impression with his unique style of rap at the 2014 Vodafone Icons remix edition, Ratty has become a favorite of Manifest who was a judge during the competition.

Ratty his appearance at the Vodafone Icons remix edition, has been dropping freestyles almost every fortnight.

If Ratty continues to get the support of Manifest, and gets collaboration with him and signing onto a good record that steer his career, Ghana will get to know of him this year.

Teephlow has featured on songs with Kwabena Kwabena, Sarkodie etc. has never failed to impress whenever he is on a song with these stars.

In december last year, he featured on renowned music producer Coptic’s The Rising Stars of GH Vol. 3 Compilation, on a song with Dblack and Edem.

With the legendary music producer Hammer solidly behind him ,this year can bring him a lot success if he continues to do music with these stars.

Rapper from Kumasi, who has carved a niche for himself as one of the finest MCs in Kumasi. He has released a lot mixtapes and won many rap battles in the Ashanti region.

With a good management, collaboration with, good videos on TV and social media to announce his presence, Willy Maame will be one of the biggest discoveries this year.

Vybrant Faya from the Original Shatta Movement Family where Shatta Wale hailed from has his single ‘Mampi’ being a massive national hit.

Emmanuel Kojo Quayson, Vibrant Faya said he is hopeful he will win the New Artiste and Dancehall song of the year awards at this year’s Ghana Music Awards.

An award at this year’s Ghana Music Awards and just a song with a catchy hook and energy like his debut “Mampi”, Vybrant Fire will cement his name as one of the biggest dancehall acts this year.

She became known as one of the hardest female rappers in the country when competed on Freestyle Saturday on KFM , a Kumasi based radio station.

Ghana got a real feel of her when she did remixes Sarkodie and Shatta Wale’s “Me gye wo girl” and Joey B’s “Tonga”.

Two or three singles of her own, getting featured on songs with any of Ghana’s finest Emcees, doing a few more feminist remixes of popular songs and good videos will easily propel her career in 2015.

What do you think of the list? Any artist who could or did not make the list?