Zimmerman Juror Comes Forward And Says He ‘Got Away With Murder’ 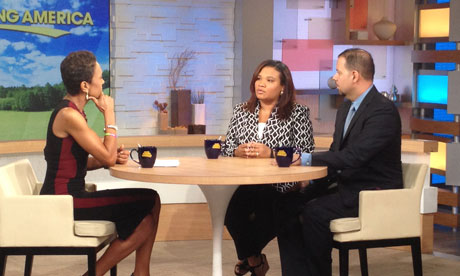 Juror B29 spoke to Good Morning America and cited the lack of evidence as the reason George Zimmerman walked free.

A second juror in the trial of George Zimmerman has given a TV interview saying the former neighborhood watch volunteer “got away with murder” when he was acquitted earlier this month in the shooting death of black, unarmed teenager Trayvon Martin.

The woman, identified in court as juror B29, who is part Hispanic, said she would have liked to convict Zimmerman of murdering Martin but said her hands were tied by a lack of evidence.

“You can’t put the man in jail even though in our hearts we felt he was guilty,” she told ABC’s Robin Roberts in an interview due to be aired on Friday morning. “But we had to grab our hearts and put it aside and look at the evidence,” the woman said.
Excerpts of the interview were published on ABC’s website.

Zimmerman, a white Hispanic man, was found not guilty of murder and manslaughter on July 13 after a racially charged trial. The verdict triggered demonstrations across the United States.

The jurors have remained anonymous under a judge’s order. Juror B29 allowed her face to be shown, but used only the name Maddy. ABC said the 36-year-old woman is Puerto Rican and that she recently moved to Florida from Chicago. She is a nursing assistant and mother of eight.

Juror B29 is the second juror to speak in a televised interview, and the first to show her face.

Juror B37, a mother of two who grew up in a military family, appeared last week on CNN with her face obscured. She said she believed Zimmerman, 29, was “justified” in shooting Martin, 17, during a confrontation in a gated community in central Florida in February 2012.

She said she did not think Zimmerman racially profiled Martin and believed Martin attacked Zimmerman first.

Shortly after the interview, which prompted a hostile backlash on social media, CNN said four other jurors released a statement distancing themselves from the comments of B37.

Juror B29 agreed with B37 that the case was never about race, despite accusations by the prosecution that Zimmerman had profiled Martin when he called police to report someone acting suspiciously in the community near Orlando.

The prosecution accused Zimmerman of profiling Martin and following him in the manner of a vigilante. Zimmerman’s lawyers said he acted in self-defense after Martin started beating his head against a concrete sidewalk.

Whatever the truth, juror B29 said Zimmerman had a lot to answer for.

“George Zimmerman got away with murder, but you can’t get away from God. And at the end of the day, he’s going to have a lot of questions and answers he has to deal with,” Maddy said, “the law couldn’t prove it.”

When the jury began deliberations, she said she initially favored convicting Zimmerman. “I was the juror that was going to give them the hung jury. I fought to the end,” she said.

On the second day of deliberations she realized there was not enough proof to convict Zimmerman of murder or manslaughter under Florida law, she said.

When asked by Roberts whether the case should have gone to trial, the juror said, “I don’t think so.” She added, “I felt like this was a publicity stunt.”

She said that after the trial had ended, she wrestled with her decision and had a hard time sleeping and eating. She said she feels she owes Martin’s parents an apology.

“I’m hurting as much as Trayvon Martin’s mother because there’s no way that any mother should feel that pain,” she said.