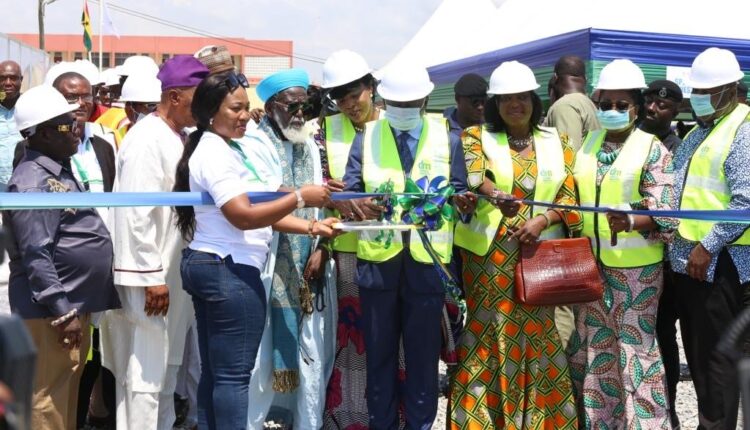 Dredge Masters Limited, a subsidiary of Jospong Group of Companies, has unveiled new dredging equipment to complement some already existing equipment to help curtail the perennial flooding in Accra.

The Amphibious Dredgers Classic V, the latest multipurpose dredger, according experts, comes with very sophisticated outlook that does multi jobs that would have required separate machines and equipment, thus making work effective.

Its operation areas include raking, piling, excavating and suction dredging.

Managing Director of Dredge Masters Limited (DML), Captain Khan, in his welcome address said: “The newly acquired equipment comes in very handy during these times of more rainfalls for the past months. The machines are well built for dredging and other multitasks and will quicken work as well as capacity.

“We can’t control nature when disasters happen but we can always try and make provisions to salvage situations in times of natural disasters and other tragic events. I would, however, commend government for their immense support. We have Barclays Bank and other international affiliates coming on board this project to make sure results materialise.”

The Mayor of Accra, Hon. Adjei Sowah, in a brief remark, was highly elated by the work done so far by Dredge Masters.

“Seeing the work done by Dredge Masters regardless of the rainfalls for the past 2 months, the company deserves a lot of commendation; they have been working extensively and we haven’t seen any major floods within the city,” he added.

However, Hon Adjei Sowah lamented bitterly about the behaviour of Ghanaians towards the environment. According to him, the practice of dumping into drains and littering everywhere was very worrying.

He, therefore, urged residents especially of Accra, to be discerning enough to use sane and effective ways of disposing refuse so it doesn’t result in choked gutters and unhygienic conditions which cost the city a lot of money and resources to address.

In his own words “we’ve done a lot of work in cleaning up the city and improving sanitation but the most important call depends on the attitude of all of us as citizens to challenge ourselves to effectively dispose garbage. This will go a long way to cut down cost in improving sanitation in our premier city.”

He eulogised him for his patriotism and selflessness to work for the good of the country, though government was heavily indebted to his company.

“The commitment of Jospong Group of Companies and their work done on this project is worth emulating. They haven’t been paid for work done but they have put in all efforts and resources to improve sanitation in the city. Development has no political colours! When it comes to development, let’s eschew partisan politics and put on the national cap and help ourselves. …If not for Jospong Group of Companies, I would have failed as a Minister” – Hon. Samuel Atta Kyea.

He was also quick to add that Cabinet has approved a US $200 million from the World Bank to deal with the country’s challenges including the dredging project of Odaw River and other associates.

Dredge Masters is supported by Barclays Bank Ghana who is now part of Absa Group. Dredge Masters and Zoomlion Ghana are part of Jospong Group of Companies.